After looking at the data, we see which players played better and which played worse at center back this season.

Share All sharing options for: Comparing Chivas USA's Center Back Pairings in 2012 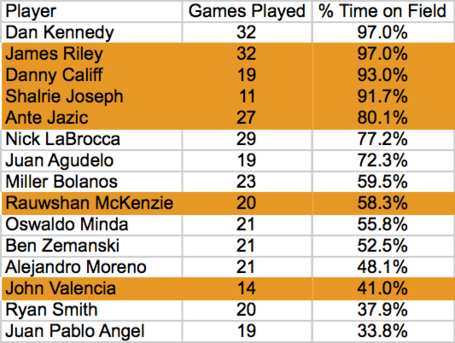 Chivas USA's 2012 season was to hinge on its backline. Adding the skilled James Riley to a line featuring veterans Heath Pearce and Ante Jazic, the Goats were going to build from the back and keep Chivas in every game. That seemed to work pretty well for the first 20 or so weeks of the season, at which point the bottom fell out and the team allowed nearly 30 goals in 12 games. By then, the backlne of the team was no longer untouchable, and the core plan had failed for the season.

As a unit, the defender position is the oldest on the team with only one player, Rauwshan McKenzie, at 25, under the age of 28. Perhaps because of the nature of the position (which tends to see few substitutions), veteran age, or because of Robin Fraser's career of manning the backline, Chivas' defenders by and large top the team in minutes. Given that, it's no wonder it wasn't until May that Fraser changed any of his backline's personnel.

As the season has progressed, the fullback positions have remained static with James Riley and Ante Jazic manning their respective positions with only a couple of exceptions. Meanwhile, the central defender position has become more in flux with eight different combinations being tried out with varying results. 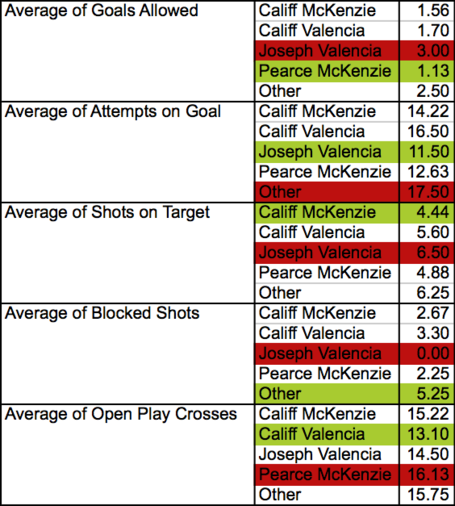 The most recent trend has been pairing Shalrie Joseph with John Valencia.

It has not worked out so well with the team drawing zero points from two matches.

Looking at the table, you'll notice the Joseph-Valencia pairing has allowed the most goals, despite averaging the fewest attempts on goals.

And--unlike every other center back pairing--the pair has been unable to block or deflect any opponents' shots.

Of course, it must be stated that these statistics are limited in scope and sample size. For instance, Heath Pearce and McKenzie can't be blamed for the goal in the first Portland Timbers match, which came about because of a mid-air collision between Dan Kennedy and Riley. At the same time, several times Kennedy has made remarkable saves when the central defenders were clearly beat.

It is vexing, at least based on on-field performance, as to why McKenzie has been summarily dropped from the lineup. Chivas' record with McKenzie is the lineup is far better than without him. My theory--and it's just a theory--is that McKenzie is relatively cheap, Chivas likes him and expects him to play a role in the squad next year. Meanwhile Chivas now has the luxury of using the last few meaningless games of 2012 to scout the partnership of Joseph and Valencia.

While that explanation makes sense at a certain level, it sure seems odd to acquire a designated player, which Joseph is, and have him play out of position. He has played in defense from time to time for the New England Revolution, but his placement in defense with Chivas seems like a measure to put a square peg in a round hole, doesn't it? At any rate, the data so far indicates it isn't working very well.