The Goats recent form is a far cry from the team that only allowed one or fewer goals in all but four of their first 20 games. The losing mentality has taken hold on the team causing mental mistakes and a lethargy that has crippled Chivas USA.

The playoffs now mathematically out of reach, Chivas USA is now playing for pride and jobs next season. The Goats' recent form is a far cry from the team that only allowed one or fewer goals in all but four of their first 20 games. The losing mentality has taken hold on the team. Chivas are crippled by mental mistakes and a lethargy that ultimately eliminated them from playoff contention.

The scoreboard may suggest otherwise, but this Chivas side is not so much being dominated by other teams but rather playing a very sloppy brand of soccer against opponents who are capitalizing on their mistakes. Unless they can break out of it, they are doomed to add to their seven game tailspin.

When you are outscored 8-0 in two matches separated by only four days, there is no shortage of footage in which to demonstrate improvement. Indeed, look no further than the 81st minute from Saturday's home loss to RSL. Fabian Espindola earns his third assist of the night in the sequence below. 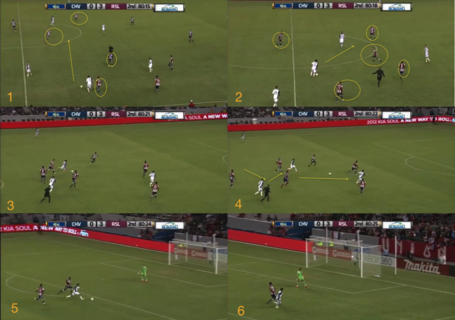 1. Espindola darts with the ball from the sideline to the center of the pitch with Miller Bolanos in close pursuit.

2. The referee signals to Bolanos to not be so aggressive. Bolanos dutifully drops back. Espindola, being nearly surrounded by five Chivas players, continues his dribble by breaking into a sharp diagonal run.

3. Espindola beats his marker and breaks sharply toward the goal line. Will Johnson (8) moves forward while Paulo Jr. (23) looks to move forward while minding the backline to avoid an offsides call.

4. Espindola plays a one-two off of Johnson then threads a perfect through ball to Paulo Jr. between John Valencia (5) and Ante Jazic (13).

5. With Valencia and Jazic on their heels, Paulo Jr. only has Dan Kennedy to beat.

6. Kennedy can only watch as Paulo Jr. adds the exclamation mark to the RSL rout.

The entire sequence took little more than ten seconds but it explains the gulf between Real Salt Lake and Chivas. Even being up 3-0 in the dying minutes of the match, RSL was looking for more and Chivas was asleep. 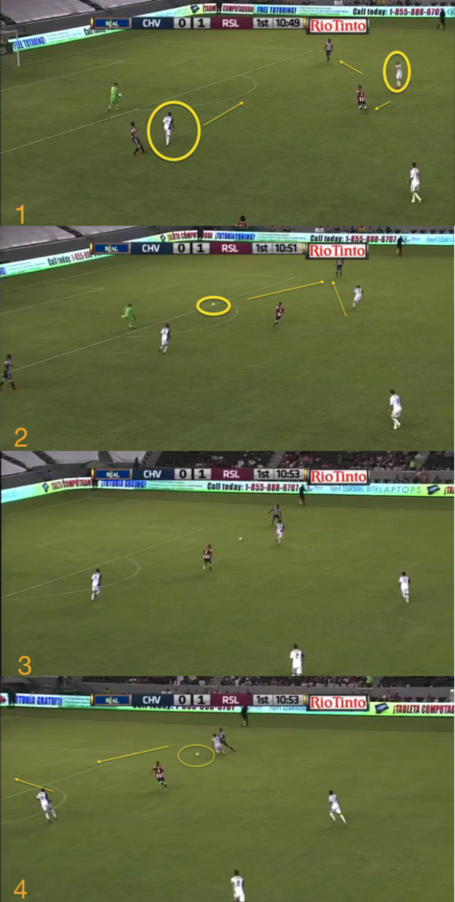 And that's the way it was from kickoff to the final whistle.

RSL was opportunistic, dynamic and looked to assert themselves every single minute of the match. Perhaps nowhere was this more evident than Espindola's 11th minute interception that netted Alvaro Saborio his second goal.

Now stop me if you've heard this one before ...

1. RSL is pressing high. Kennedy (in the green) is either unaware of the pressure or underestimates Espindola's speed.

2. Perhaps fearing a drop kick will only return possession back to RSL, Kennedy rolls the ball to John Valencia. Espindola immediately breaks toward the ball.

3. Valencia is frozen flat footed blatantly disregarding a tenant of Soccer 101--always run towards the ball when receiving a pass.

4. Espindola gets to it first and hits a breaking Saborio for the sitter.

Clearly these defensive lapses and misjudgements are new to a team that came into the year knowing it had to be perfect in defense in order to stand a chance.

Whether these lapses are a result of a team pressing too hard for a result or the work of a team that is just looking to be done with the 2012 season I cannot say. (I'm loathe to the use the "Q" word).

What is true is that Robin Fraser can train, coach, motivate and ultimately place the players on the field. Once on the pitch, it's up to the players to perform. There are plenty of problems and blame to go around for Chivas this year but it's foolhardy to believe that simply Fraser alone is responsible for the team's current downward spiral.

Fraser can't lace up the cleats and try to put an end to the 500+ minutes without a goal streak, let alone the 14 games where the team failed to score. If the season ended today, only three teams in MLS history were shutout more than the Chivas' 2012 squad. A dubious distinction.

Images for play breakdowns from game highlights on MLSsoccer.com.