Wonderful Wondo and the Ghastly Goats

Wherein we make the case that one player was more productive than an entire team in 2012.

Share All sharing options for: Wonderful Wondo and the Ghastly Goats

He singlehandedly scored 27 goals, helping his team win the Supporter's Shield. They cobbled together goals from thirteen different players en route and posted one of the worst home goal scoring tallies of all-time history. Yet, Chivas USA and Chris Wondolowski's 2012 seasons have a couple of similarities ... and many, many contrasts.

2012 seemed pretty unlikely to be the year that Roy Lassiter's scoring record would fall. 27 goals--the record set in the inaugural 1996 MLS season--belonged to a league who knew nothing about designated players, soccer specific stadiums or heck, forward-counting clocks (!!). After all it was ten years ago when anyone topped 20--Carlos Ruiz scored 24 and Taylor Twellman had 23 in 2002. But as Chris Wondolowski strived for the former Tampa Bay Mutiny player's accolade, Chivas USA sought and ultimately was able to (but--at 24--boy was it close) avoid a league record owned by D.C. United: the league's lowest-ever goal total of 21 which it "achieved" in 2010.

Wondo scored 15 goals when the Quakes played as the home side.

Chivas USA scored 10 goals at the Home Depot Center and was shut out 10 times at home.

Wondo scored 20 goals in the 19 Earthquake wins (which, in a way is like Chivas scoring 9 goals in their 7 wins, but I digress ...) 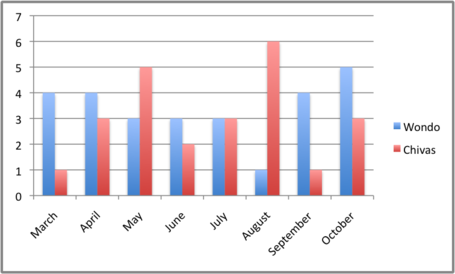 As the graph shows, Chivas' goal tally fluctuated wildly throughout the season whereas Wondolowski, with the exception of August, when the Earthquakes played only three games, could be counted on to net three or more goals on a consistent basis.

Conclusion (such that it is):

It was a rough year for Chivas. Blame the unbalanced schedule all you want (ed. - Is this being bandied about as an excuse? Really?) but Chivas and Wondo roughly played the same schedules, barring their respective teams of course. San Jose has been a hard charging team playing a "direct" style. For all of former coach Robin Fraser's observations that his team's lack of aggression in the final third, it obviously wasn't a problem for San Jose. With the sweeping changes coming in, perhaps Chivas' players can tap into San Jose's methodology and not come so close to making history--of the wrong kind--next year.