Putting some perspective in Opta's Statistics for Chivas USA

We express our reservations about the lack of Opta statistics available and dig into what we can access.

Share All sharing options for: Putting some perspective in Opta's Statistics for Chivas USA

Despite the partnership struck between MLS and stats giant Opta, only a small handful of Opta’s stats are actually available to fans. So I was looking forward to Andrew Wiebe's Opta analysis of Chivas USA. Wiebe, a former Sporting Kansas City beat writer now working for MLSsoccer.com, made sure to put in a knock against Ryan Smith, sprinkle in few interesting nuggets but mostly shine a beacon on the misery of the past year. As the title, "Numbers aren’t kind to Chivas USA" posits, the takeaway was not going to be flattering.

Not exactly earth shaking, is it? No one needs a spreadsheet to know that the Chivas offense sputtered this year. A quick glance on the goals column will tell you that.

Each MLS game has thousands of variables that Opta tracks. Some of these stats are distributed on the postgame website under "Chalkboards." But there are other things they track that the public never gets to see. For instance, Opta partitions the soccer goal into zones based on where the ball crosses the goalline. I’d be interested to know if Dan Kennedy is more prone to being scored on in one particular area.

Opta's assertion that Chivas lacked width is technically not true, since the lineup shown was a composite of the players who played the most minutes, not a real life formation. The attack flowed through the right flank once Miller Bolanos was inserted in the lineup. The problem was there was no balance on the left side. Juan Agudelo recorded his fewest touches as a starter when he played the left-wing in the 4-2-3-1. For what it’s worth, half of the 16 open play goals this year were assisted by Bolanos or flank-mate Smith.

We don’t really know how Chivas ranks in the more advanced metrics so it was useful to learn that Chivas was among the league’s worst in total tackles, interceptions, blocks and clearances, ahead of only Houston Dynamo and Toronto FC.

Digging through the available defensive numbers:

While the metrics are based on team stats, it’s primarily defenders who are responsible for these areas. Taking 2012 defender stats, I was able to make the following tables. Our defenders tended to be older, highly paid (relatively speaking) veterans. Assuming Shalrie Joseph is to remain a defender, he is the highest paid going by 2012 salary figures by a long shot (you may recall Califf is definitely not returning to Chivas USA in 2013).

*Starts = number of games starting at defender. Joseph started three games at central defense. Ben Zemanski started two games at right back, but he was primarily a midfielder.

I thought--incorrectly--that Chivas did better in these categories earlier in the season. Turns out their best month was September. On one hand, they played six games in September. On the other, they went 0-6-0 that month. 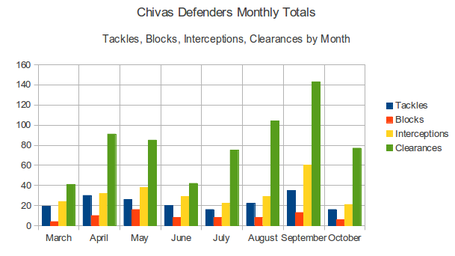 Wiebe never really says if Chivas was third to last in four categories or in sum aggregate of the four statistics. Not having the Opta stats, I have no way of knowing, but from the numbers you can see Chivas seems to have no problems clearing the ball. However they seem timid about tackling. Defenders only "lost" 41 tackles--slightly more than 1 a game and a percentage of 18%. This suggests to me at least that defenders are overly cautious about going in for a tackle. This is bolstered by the fact that Chivas was among MLS leaders in fewest penalty kicks conceded in 2012 and near the top in fewest yellow cards (well, with the notable exception of MLS yellow card leader Oswaldo Minda). 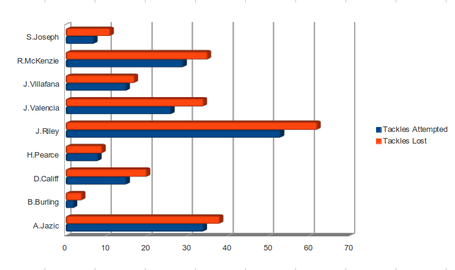 Keep in mind James Riley played the most games (32) so it's expected he would be the highest minutes and therefore volume.That said, clearances appear to be a central defender's game as Califf, McKenzie and Valencia all led the team in that category. With the exception of September, most interceptions were either in the midfield or captured by a full back. 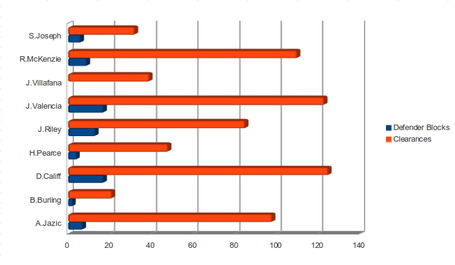 We'll be continuing to examine the various takeaways for each player during their upcoming postmortems. However, if there is one overarching theme it is this: with Dan Kennedy between the pipes, our defense could have been more aggressive in 2012.