The rookie had a quiet season, but is there more to see in 2013?

Chivas USA only had one 2012 MLS SuperDraft pick, and they selected Maryland forward Casey Townsend with the fifth overall pick. Considering the fact that neither of Robin Fraser and Jose Domene's 2011 SuperDraft picks (Zarek Valentin, Victor Estupinan) were on the team to start 2012, I suppose one could wonder if they valued the draft very much. But in opting to select an American who used up his college eligibility, Fraser and Domene were sure to avoid some of the pitfalls that came with drafting Valentin (cost - his high salary went on Chivas' books for 2012 with his "graduation" from the Generation Adidas program) and Estupinan (a project who took up an international slot).

Townsend came from a top college program and had a good career, drawing comparisons to fellow Terp Taylor Twellman in the process. He scored several times through the preseason, and although it was unclear how many minutes he would get in his rookie year, with experienced MLS vets like Juan Pablo Angel and Alejandro Moreno ahead of him in the depth chart, it seemed like he'd make an impact.

In the end, like so many of his teammates, Townsend did not produce very much, only scoring one goal in a competitive match. It was, of course, the famous game winner against Real Salt Lake in March, and it helped the Goats win their first game of the season, and provided a high point for the team. But his playing time was extremely spotty during the season. He appeared in seven of the first eight games of the season, then played only 13 minutes in one appearance through all of May and June. He played 11 minutes in July, played every match in August, where he racked up two assists (his only on the season), and didn't play in the final five games of the season. To say it was up and down would be an understatement.

Townsend seemed to be a good team player, and like Juan Agudelo, he was pushed back to the midfield for some of his minutes in 2012, despite looking like forward was unquestionably his best position. I think the willingness of Townsend to track back helped get him on the field at times, but he seldom ended up in a scoring position because he was so far back. Oh, and he missed some sitters against D.C. United in his last appearance of the season, when he was started as a striker, and he never played again. Great man management for a rookie, huh?

Here are Townsend's statistics for 2012:

One thing that really surprises me is that Townsend wasn't given any minutes in the USOC. I know fellow young forward Cesar Romero really became the go-to young attacker for that tournament, but why didn't Fraser give Townsend a chance to get pro minutes against lower-league opposition? From what we did see, Townsend looked good when he got service and playing time up top, so why didn't he get some more consistent minutes?

Despite being dubbed the "white Chicharito" by fans at the start of the season, Townsend doesn't fit the profile that Jorge Vergara and Chelis have discussed publicly. But he'll be on a rookie deal ($44,000 base salary, $79,000 guaranteed compensation in 2012), with a year of pro ball under his belt, and if he's given a shot, I think he could really come good. His heading ability alone is a reason to see him on the field, as he isn't tall compared to most centerbacks, but he could rise up and put his head on the ball like nobody else on the Chivas roster in 2012. It would be hard to argue that his rookie year was successful, but in limited minutes he showed enough potential to hope 2013 can be a breakout year for him.

Scoring Threat: C+
There's a reason the MLS SuperDraft has been called the "most meaningless draft in sports." It's hard to evaluate a rookie coming from the college game. Besides the lesser competition, NCAA college rules allow nearly unlimited substitutions, not to mention timeouts. As such it's probably little wonder that seldom are the the top draft picks Rookie of the Year recipients. (The lone exception: Maurice Edu).

Which is not to say Townsend was a complete man of mystery; Alicia and Rachna were prescient about Townsend's aerial abilities. The Michigan native easily led all Chivas forwards in headers with 68 on the season, or an average of 2 headers more than the rest of the forwards. 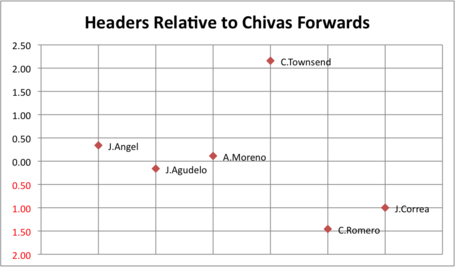 Unfortunately Chivas did not attempt to take advantage of Townsend's aerial prowess. Chivas averaged nearly 19 crosses per game in 2012. However, in games in which Townsend started, the Goats only attempted an average of 17.3, a number which is heavily skewed by the 33 cross attempts in the first match against the Vancouver Whitecaps.

Despite playing just over 900 minutes, Townsend took 17 shots, 8 of which were on goal, yielding a team-high shot on goal percentage of 47.1%.

Playmaker (Passing/Creativity): C+
Townsend's passing rate was fair. He did compile assists in two games in August. What Townsend was able to do was to stretch the defense with creative runs without the ball. Former assistant Greg Vanney was very high on Townsend's ability to prevent defenses from collapsing on one player.

Up until now, most quantitative data could only be tracked by touches on the ball. However next year, adidas will have trackers installed in players' kits that will measure a players runs, track the players position on the field and other metrics. Perhaps we can gauge the effectiveness of runs off the ball next year.

Defensive: C-
Amongst forwards, Townsend is last or near last in about every trackable defensive metric: tackles, takes-ons, interceptions, blocks and clearances. Townsend certainly would track back when the occasion deemed it necessary but he also knew his responsibility was to spring the counter-attack.

Oh Casey Townsend. I'm still going to take credit, along with Alicia, for him coming to this team last season. Besides that, I'm a huge fan of his and would really love to see him find his place as a permanent starter for this team. I think he was immensely underutilized for Robin Fraser. In addition to scoring goals, he has the vision and ability to work with his teammates and set up plays. His all-around skill was sorely needed in our offense, which is another reason why I question the fact that he didn't play much. Also, he scored our first goal of the season away to RSL - if this kid can do that, why didn't we see him more? Even with long gaps between games, he always contributed. The few knocks on him come in defense, and ability to hold up play. The latter is something that he should fix easily, since he does it a little but isn't up to quality yet (but will be, should he get the minutes and practice). As for defense, Townsend was one of those players that didn't track back enough. I'm all for scoring off the run of play, but tracking back is a must.