In MLS, Picking up Cards isn't a Bad Thing

Despite Oswaldo Minda's Wondolowski-esque 13 yellow cards, Chivas USA actually finished 2012 as one of the least penalized teams in MLS.

Share All sharing options for: In MLS, Picking up Cards isn't a Bad Thing

Let's say you wanted to create a table to rank teams based solely on a team's accumulation of cards. There's already a measurement of this. It's called "Fairness Points" and it's a basic, if overly simplified, method to discern the league's more, ahem, "undisciplined" clubs.

Points are awarded as:

* yellow cards as one point

Using this metric, Chivas finished 2012 fourth in the so-called "Fairness Points" table with a score 53, 13 points (or one Oswaldo Minda) behind the Houston Dynamo with 40.

Interestingly, besides Houston, the remaining top five teams (the Colorado Rapids, New England Revolution, Chivas USA, and Toronto FC) share a common, unifying thread: they were all terrible in 2012.

Meanwhile, the so-called "losers", at the bottom of the table all made the playoffs: the Vancouver Whitecaps (81), Real Salt Lake (79) and the San Jose Earthquakes (77).

This trend is present in Chivas USA's own history. Take a look at the table below and note how the squad's Fairness Points fluctuate between playoff and non-playoff years.

*I guess they didn't consider James Riley's dissent a "send off" because it came at the end of the game? (Ed: That matter has still never been explained by the league). 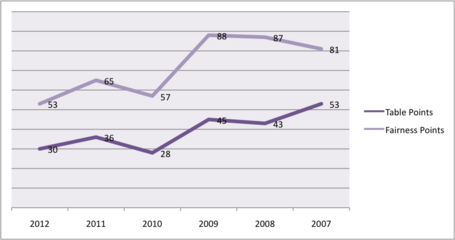 Back to 2012, Chivas actually accumulated more cautions than their opponents did: 56* to 47.

The data is really inconclusive about "why" this phenomena exists. For instance, the Goats had four yellow cards in their win in Utah over RSL which really skewed the results.

But I'm going to take a crack at this: when the team is aggressive and attacking both on offense and defense they tend to play a better, more focused brand of football. However, if you are timid and nervously looking at the sidelines for instructions, that intensity and drive won't be there. After all the four teams that aren't Houston all had new coaches and new systems in place in 2012.

I always got the impression that Robin Fraser is a really smart guy but he tried giving the team too many instructions. Instead of playing soccer, they were busy processing like an overloaded computer. All of which may explain why he was so quick to use veterans even though the RSL model he preached emphasized a core group of young players who grew together through the same system.

For 2013, the lesson is that Chivas need players who get stuck in, who draw cards more often, and who aren't afraid to play on the edge of smart and dirty. To put it simply, they need a badass (or a few badasses).