In the only (for now) MLS crosstown rivalry, there was no shortage of animosity between the sides and passion in the stands on Saturday. Perhaps heightening the tension was the fact that Robin Fraser's bench featured several Galaxy expatriates. Besides Juan Pablo Angel, Peter Vagenas and Paolo Cardozo were in the matchday 18.

With the win, Chivas USA stopped their season-long home losing streak, pitched their first home clean sheet and continued their streak of being undefeated against last place teams. (Following the Portland Timbers win over the Chicago Fire last night, the Los Angeles Galaxy are now last in the Western Conference table).

Some thoughts on the teams tactics and chalkboards after the jump! 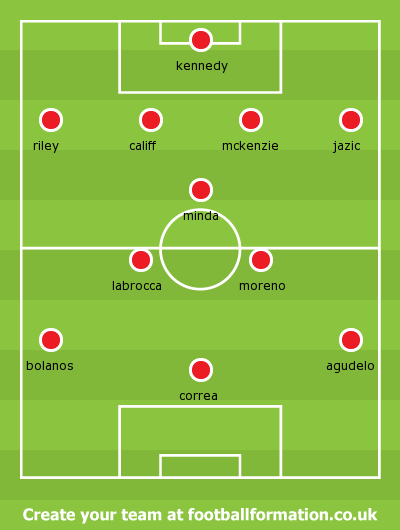 Stick two people in front of a painting and you may very well get two opposite reactions. So perhaps it wasn't surprising that ESPN and MLS upon receiving Fraser's lineup submitted two very different formations (a 4-3-3 and a 4-5-1, respectively).

In truth, both were right. On the attack, Juan Agudelo and Miller Bolaños blazed through their respective sides, collapsing defenders into the box with their volleys into the goal area. The wingers dropped back when possession switched, although seldom below the midline.

This Chivas squad, even without Michael Lahoud, has depth in the wings. As a result, Bolaños was subbed for the second week in a row despite, again, a fine showing on both sides of the ball.

Only this time it was Jorge Villafana who came on for Bolaños instead of Ryan Smith, who did not make the first 18.

Once on the pitch, Villafaña took the left wing and Agudelo--who had played the left in the first half--switched to the right. I think Fraser may be expecting Villafaña to replace Ante Jazic in the lineup when the left back leaves for Canadian national team duty.

Midway through the second half, Chivas managed to string together 26 consecutive passes up and down the wings. Stringing together so many passes in your opponent's half is an impressive feat and a step in the right direction for a squad with so much youth up front.

Looking at the chalkboards from the 67th to 70th minute, you'll notice until the final volley by Correa that lead to the penalty, the ball never broaches the box. That's actually a good thing! They played a patient attack instead of trying to force the ball into the box and prematurely squelching a scoring chance. 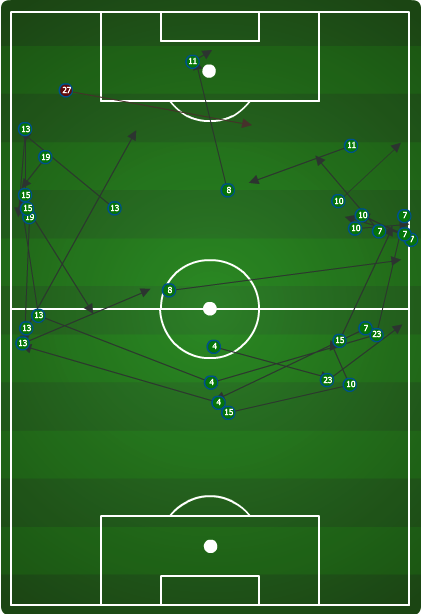 Of course, winning possession means little if you don't create any scoring chances. Thankfully we had Juninho to help set the table for the other team.

The red 27 (Jose Correa) indicates the endgame. Correa's pass was deflected by Juninho. Juninho's deflection lands at Minda's feet. Minda quickly chips the ball into the box where a penetrating Agudelo manages to just barely to flick it on before being subdued by the Galaxy keeper Brian Perk. The ball lands where Correa is able to put a swift kick on it and, if not for a David Junior Lopes handball, would have been the first Chivas home goal not scored by a penalty this season.

As expected, the Galaxy did come close to finding the equalizer but the Landon Donovan handball in the box put the nail in that coffin leading to heated exchange between Donovan and Chivas' Number One Dan Kennedy.

(fun game: what do you think Donovan said to Kennedy? Leave your guesses in the comments!)

One last thought--in case you haven't seen it, Soccer By Ives posted a great pic of recently mustachioed Blair Gavin on Instagram.