What's going on in Seattle? The perennial contender is coming off it's second home loss of the season, this time a 2-0 loss to Columbus. Last week Chivas USA stopped the streak against the Galaxy. Could the Goats overcome their history over Seattle after a dizzying week?

Since joining MLS in 2009, the Seattle Sounders have not been shy about stating their lofty ambition of winning the triple, i.e. the U.S. Open Cup, the Supporters Shield, and the MLS Cup. While they've thrice won the Lamar Hunt U.S. Open Cup, they've fallen short of the Supporters Shield, in no small part due to that other LA team. Meanwhile, despite remarkable regular season records, the Sounders have yet to win a playoff series. Despite another stout start, the Sounders have gone 0-2-1 recently and sound less like Nirvana and more like Screaming Trees at the moment.

With legend Kasey Keller retiring at the end of last season, it wasn't unthinkable that the Sounders would take a step back at goalkeeper. However the Sounders new goalkeeper Michael Gspurning played well until injury. The Sounders turned to Bryan Meredith who started well but appeared over his head in their mid-week loss to Columbus.

From looking over the match, it's difficult to say whether Columbus won because of luck or if they have stumbled upon a blueprint for beating the fellows wearing the rave-green jerseys. Like Muhammad Ali beating George Frazier by playing rope-a-dope, could it work in MLS?

Columbus lost the possession battle to the Sounders. In fact, Columbus happily conceded possession to Seattle. A Justin Meram strike in the 15th minute put the Crew on top. From there they all but parked the bus until Emilio Renteria sealed the win with a 30-yard chip over Meredith in the late stages of the match.

There has been no denying that this Seattle squad can score goals. However in the offseason, coach Sigi Schmid went all-in acquiring Eddie Johnson from Montreal (via the Allocation Order). Johnson started slowly but has now scored three goals. Johnson started along with strikers David Estrada (four goals) and Fredy Montero (four goals).

To counter this formative trio, Columbus installed a five man back line and absorbed the pressure Seattle brought. (Had veteran defender Chad Marshall been in the lineup, this might not have been necessary). 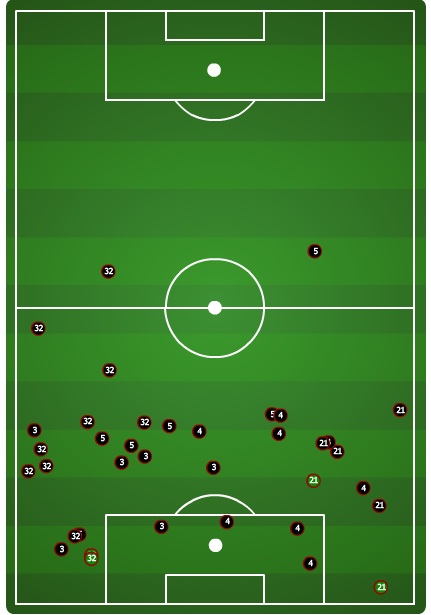 In the end, the Sounders squandered their chances. According to the MLS statistics website, Seattle made 21 attempts on goal (though it seemed more than that). 15 shots were on goal forcing Andy Gruenebaum (himself a backup goal keeper when the season started) to make six saves.

The Crew's defenders bunkered down and while they bended, they did not break. Shown here in the diagram are the Columbus back five's Interceptions (16), Defender blocks (four), Blocked crosses (four), and Recoveries (13). Additionally, the Crew's five defenders made 33 of the team's 43 clearances.

So it's an open question: can Columbus take credit for devising a way to take advantage of a well-funded, 3 DP goliath or were they just darn lucky?

Can Chivas defeat the Sounders without parking the bus to do it? Obviously, we'll have to see in this game.

One thing easing the Goats' task is the absence of Osvaldo Alonso, as predicted by Alicia Ratterree, who will not be suiting up the match on account of suspension. Alonso is among the best defensive midfielders in MLS. Seattle has depth at every position, but Alonso's play is so valuable to the team that his VORP (Value over Replacement Player) would be high. Needless to say, his absence compounds matters in the box and along the back line, and that could prove significant in this match.