Expect Scoring, Like Gas Prices, to Surge this Summer for Chivas USA

Share All sharing options for: Expect Scoring, Like Gas Prices, to Surge this Summer for Chivas USA

"Despite millions of dollars of research, death continues to be our nation's number one killer."

Right up there in terms of "duh" statements is the observation that teams that can't score generally don't win. Look no further than the Philadelphia Union and Toronto FC. These two Eastern conference bottom dwellers are the only teams who, thanks to a recent five game scoring streak, have managed to score fewer than Chivas USA's paltry nine goals in 13 games.

One perk of such a low output, is that it's very easy to suss out the pertinent details.

This is a chart of Chivas' total goals scored since 2007, plus their overall rank in the league (note: there were only 15 teams in the league in 2010). As you can see from the 2012 numbers, Chivas has scored nine goals on the season and is currently on pace to net a paltry 23 goals. We shouldn't take too much stock in that projection though. You'll notice Chivas has never scored fewer than 31 goals (in the inaugural 2005 campaign and in 2010).

Here are a few reasons to expect scoring to improve:

Below is a breakdown of the methods or players who've set up the goals Chivas has scored this season. As you can see, it's a pretty regular distribution where the goals are coming from: 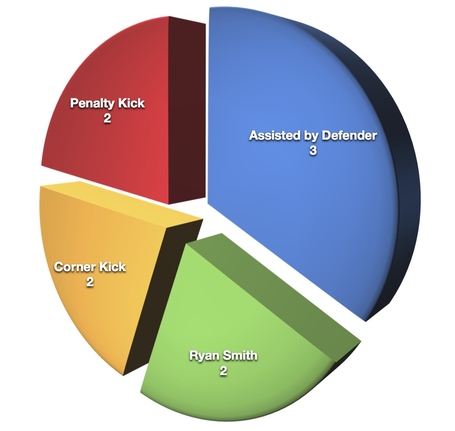 Let's compare Chivas USA with D.C. United. Ben Olsen's group leads MLS in scoring with 28 goals. Here is how their scoring breaks down: 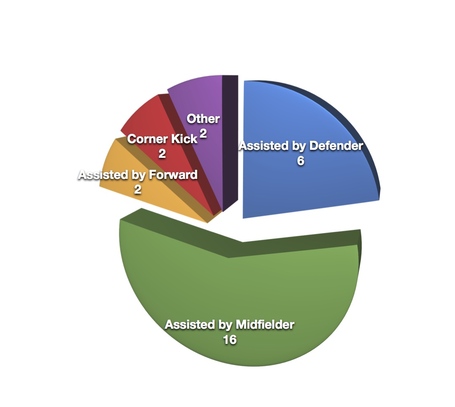 As you can see there is a wide, gaping chasm between the two teams in goals assisted by midfield. Is there anything to draw from this? For our purposes, you can see why DC's Dwayne De Rosario is the reigning MVP as he has half of the assists from midfield.

In many ways, it's an unfair comparison. The teams are obviously different in their philosophies where Ben Olsen likes pace from his midfield, and Fraser seems content to bring wingbacks in to distribute scoring chances while having midfielders playing possession.

I question whether this is enhanced by the fact that Jazic and James Riley are fixtures in the lineup while the midfield wings have been constantly in flux. To demonstrate this, the midfield flank positions have been manned by Blair Gavin, Miller Bolaños, Ryan Smith, Laurent Courtois, Ben Zemanski, Juan Agudelo, Michael Lahoud, Jorge Villafaña, and Scott Gordon this season.

It does appear that Fraser seems to be establishing some kind of rotation by putting Agudelo and Bolaños in with Smith or Villafaña coming in as subs. Perhaps stability at the position will yield those goals (and consequent wins) fans of the Rojiblancos so crave.