The Rusty Bucket: How Rest May Impact MLS Clubs This Week

Share All sharing options for: The Rusty Bucket: How Rest May Impact MLS Clubs This Week

"If you rest, you rust" --Helen Hayes

Real Salt Lake was one of two MLS clubs who lost their 2012 U.S. Open Cup 3rd round match despite playing at home. Unlike the Portland Timbers, however, who lost to a fifth-tier United States Adult Soccer Association club who have this for a logo, the Utahans lost to a team, the NASL Champions Minnesota Stars--a team who would be a RSL peer if MLS had a promotion/relegation mechanism in place.

Following the 3-1 loss in which 18,000-plus RSL fans piled into Rio Tinto Stadium to support their team--setting a U.S. Open Cup match attendance record in the process, coach Jason Kreis declared the team "let them [Real Salt Lake fans] down miserably." Kreis vowed that "I would not want to be a player under me right now," and true to his word, Kreis has worked the team "extremely hard."

It will be 18 days between matches when Real Salt Lake comes to Carson this Saturday. But it won't only be Chivas USA that RSL will be taking on this weekend but history as well. Why? Read on after the jump!

Contrary to what many would expect, time away from competitive matches harms teams more than it helps them. I would have thought a extended time between matches would be a valuable asset for teams, the thinking being a period for teams to rest injured players better familiarizes new players with the system and even develops a wrinkle or two in set-pieces would give teams an edge on their next opponent.

The data however simply does not bear this out. 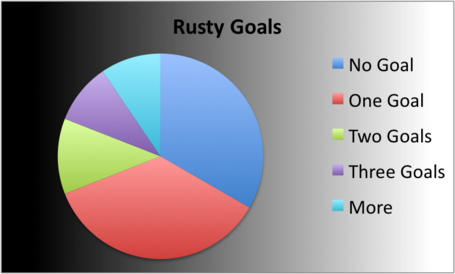 Several teams had layoffs but did not factor into my calculations. For instance, teams who participated in U.S. Open Cup matches or CONCACAF qualifying were not counted. Periods of time when friendlies took place were included. My reasoning being that teams don't put forth the effort to win friendlies the way that they would for elimination tournaments.

Also matches where both teams had incurred long layoffs were not counted. It seemed like a waste of effort to tabulate the results of two teams who will, obviously, cancel each other out. Unfortunately, this was a frequent problem in tabulating the 2009 and 2010 seasons which explains why 80% of all the matches counted were in 2011.

Looking ahead, with recent changes to the U.S. Open Cup, as well as the decision by MLS to take a break during the international period (at least for 15 of the clubs in the league) it meant that several MLS teams have had an extended layoff.