Coming off the international break last week, Chivas USA was riding a six-game unbeaten streak across all competitions. Chivas' return to league play was bumpy but the Goats have returned to their winning ways with a two-game unbeaten streak. Tempering this, Chivas have slipped in the table over the weekend. The Others (i.e. LA Galaxy) leapfrogged both the Goats and the Colorado Rapids by virtue of their three-game winning streak. Chivas has tied Colorado on points at 19 while the Portland Timbers victory put them in striking range at 16 points.

A look back at the week's tactics, formations and Opta love after the jump!

Against Montreal, we learned that Ben Zemanski and Oswaldo Minda have formed a solid partnership in the center of the pitch. One will move up while the other will move back. There were some moments when each moved forward checking over their shoulder to make sure coverage was there but all-in-all it seems coach Robin Fraser may have found his midfield triangle once Nick Labrocca is cleared to go the full 90. Oh and after Minda has served his suspension for yellow card accumulation. 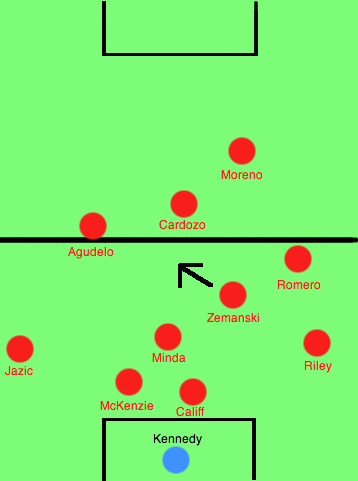 After getting torched by Real Salt Lake's Fabian Espindola's penetrating runs in the wide gaps between Minda and the backline, Minda and Zemanski both played back almost to the point of encroaching on the defenders. Zemanski continued to bring energy to the box-to-box position. His play wasn't perfect but he usually had the speed to mask his mistakes. The lone exception was when he failed to get a foot on the cross that led to the Impact's goal. It's hard to fault Zemanski though--he was the most active player out there and was rightly Christian Miles and Eric Wynalda's "Man of the Match."

Zemanski must be familiar with the OptaJack twitter account because he also tried to change Chivas USA's fortunes from outside the box.

In Dallas, the team went with the same lineup though in more of 4-3-3 but with Paolo Cardozo, not Cesar Romero, as the right winger. Cardozo played higher, although slightly more to the center, than Romero who stayed on the right except when tracking back on defense.

Another tweak from Wednesday's line up is the team's extreme move to the right while Agudelo moved more to the left and remained virtually stranded on the left flank. Despite being the youngest and probably most gifted player, Agudelo's effort was largely negated. Like water, which will always flow where gravity takes it, so did FC Dallas, who went to the right (our left) for the majority of their chances. 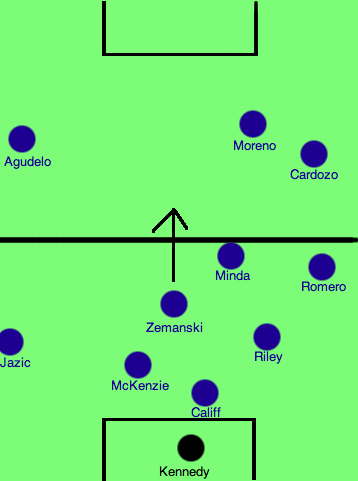 Fatigue was a factor particularly for older players such as Ante Jazic and Alejandro Moreno. Jazic, for instance, has never had less than 100 "event"--anything that Opta records during a match--had only 87. Moreno's event total was in line with his usual range, however Moreno seldom traveled past the centerline during the Dallas match. The team put through the most clearances since Danny Califf put on the red-and-white uniform. Throw-ins on the Chivas half of the field were dangerously poor--of 10 throw ins, only 4 were successful. Luckily, FC Dallas weren't able to capitalize.

More telling is that Chivas attempted a sum total of two, yes, *TWO*, shots. Likewise only 10% of their crosses (i.e. two) were "successful crosses," one by substitute Laurent Courtois, the other a corner kick by Romero. Oddly Opta may have ruled Romero's 44th minute corner as "successful", but the statistics gathering company also points out that Chivas's three corner kicks were all considered "short" and that none of the corners actually made their way "into the box."
All in all, Chivas got four points, which is a pretty good points haul in a short week. The Montreal performance wasn't perfect, but it was far more crisp, while the Dallas result was basically a war of attrition. Still, Chivas are still playing decent soccer and getting results.
What do you think? Leave a comment below!