U.S. Open Cup By the Numbers

Share All sharing options for: U.S. Open Cup By the Numbers

It was a good run by the Goats in this year's U.S. Open Cup. While they may not be taking any hardware home, the boys can still hold their heads up high knowing the team played some of its best soccer in the tournament. Previous to the loss Wednesday to the Seattle Sounders, Chivas USA capped wins with literal last second heroics in two consecutive games. A look back at the numbers after the jump!

Opta, the statistics company that works with MLS, recorded events and statistics for all the US Open Cup games with the exception of the match against the Ventura County Fusion. Thanks to Opta, we know that against the Carolina RailHawks and the Charlotte Eagles, Chivas USA put up, by far, their highest offensive production averaging just under 14 attempts on goal per game, far higher than 9.8 they average in league competition.

Besides faring better in the attacking third, the Goats controlled possession 52.6% against Carolina and 60% against Charlotte. The last time the team owned as high possession in the league was May 26th this year against, wait for it, the Seattle Sounders.

Yes, those same Seattle Sounders who derailed Chivas' USOC record were the same team that seemed content to play for a 1-1 draw not all that long ago. If you think Chivas' stats were heightened by the tournament, check this out. Here are two tables, one for the Sounders and the other for Chivas. In the tables are the stats collected by Opta following the league match in late May and the USOC competition. 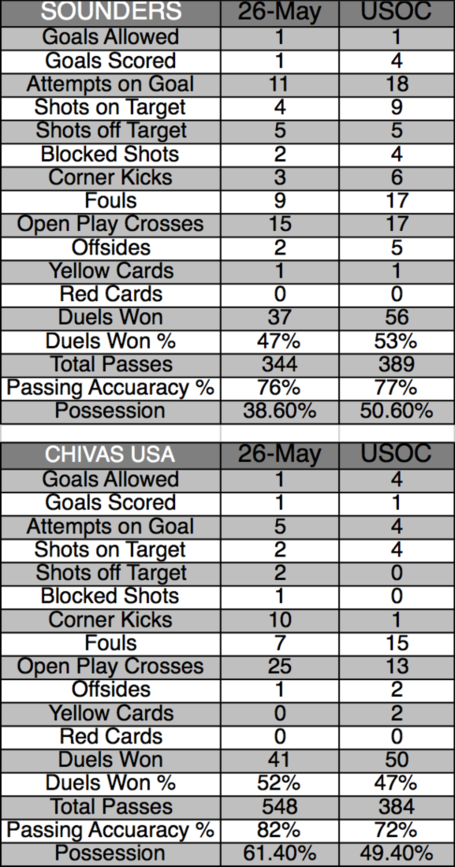 I realize this might seem like sour grapes, but the fact remains that the outcome is so strikingly different that it defies logic.

In every statistic the Sounders elevated their game in Open Cup play, sometimes even doubling their statistics in areas that demonstrate aggressiveness (e.g. Shots on Target, Fouls, Possession and Offsides).

This performance came against a Chivas side that was, for all intents and purposes, a much more defensive unit in the Open Cup than the squad that faced Seattle in May.

Had the team kept the game close--and they did for a large portion of the match--then Fraser's gambit might have paid off.

Instead Dan Kennedy, in his first match of US Open Cup qualifying will have four goals affixed to his stats or double what backup Tim Melia accrued in his three appearances.

This is probably a good of time to say this any time: it's time to re-think Alejandro Moreno as an offensive weapon. Scorers need to score and in order to score they need to shoot. He's not doing that--he has taken a total of four shots in the last three months. One of those, a shot deflected off a thigh that led to the goal in the league match against Seattle, can hardly be counted.