Share All sharing options for: Ryan Smith and the Dribble Drive Offense

Vacation was fun but it's good to be back home away free from humidity, mosquitoes and no bandwidth. The confines of the Home Depot Center haven't always been so kind to the Rojiblancos, so much so that many Chivas USA fans want to regard all Superclasicos as road games despite the fact that really both teams are playing a home match.

Looking back to last week's midweek game, given the Goats' home woes, when facing a Portland side that was winless on the road, something had to give.

The match itself had all the trappings of a nil-nil draw. Take a look through the match statistics and you'll find they look eerily identical:

And it may very well have been a scoreless draw, if not for Ryan Smith, continuing his torrid run against the Portland Timbers. Though not credited with the assist, the Englishman set up the solitary goal with the soccer equivalent of the off the backboard pass.

The scoreline certainly didn't show it but last Wednesday's matinee featured a season-high 10 successful dribbles for the Goats. What does that mean exactly? Find out after the jump! 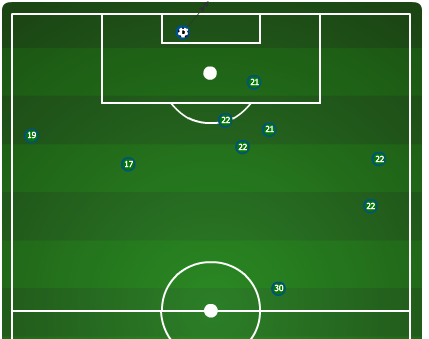 A successful dribble means the player beats the defender while retaining possession, unsuccessful ones are where the dribbler is tackled ...

Ryan Smith led the team with four, one of which immediately led to Miller Bolanos' goal.

Incredibly, so many of these dribbles happened in the the final third of the field, i.e. that place where the Goats have so often lacked aggression. The aggressiveness sadly did not lead to any further goals, and frankly, I think Paolo Cardozo and Ben Zemanski were frankly unlucky to not score.

The green circles in the chalkboard above shows the spots where Chivas players blew right by a Timbers player while maintaining possession of the ball. Passing is great but it you can beat your man and keep possession, well It's not often we can compare a Chivas winger to Arjen Robben, is it?

Despite Opta's definition, whether a dribble is successful or not is a subjective definition. I'm also unsure where to draw the line between "unsuccessful dribble" and "Tackled and Possession lost", another statistic Opta tracks. After all, it's not as if players are looking to stand still when they receive the ball. But I digress.

It's difficult to say where Smith and Chivas USA rank among MLS clubs however a cursory Twitter search revealed that Fabian Espindola of Real Salt Lake led MLS in 2011 with 106 take-ons and that as of July 12, Fabian Castillo of FC Dallas leads MLS with 96 take-ons, 34 of which were successful dribbles. (And it's a darn good thing for the Timbers that Castillo had to serve a suspension for yellow card accumulation on Saturday night, or else the carnage in a 5-0 result may have been even greater.)

As far as the team counts are concerned, Chivas shows success--at least initially-- to the Cascadia teams in this arena.

Of the team's 68 successful dribbles through 18 games [2], more than half (36) were accrued in the six games against Portland, Seattle and Vancouver. The other narrative is that the four opponents are the four most recent expansion sides. Though perhaps it should be pointed own that the April match against the Philadelphia Union was an unusual affair of red cards and ceding possession.

Notice I said 'initially' because in the team's second meeting against Vancouver, the Whitecaps halted the dribbling attack. Meanwhile New York, a midweek match, allowed only one successful take on, and Real Salt Lake has completely shutdown any thoughts of dribble penetration in both 2012 matches. 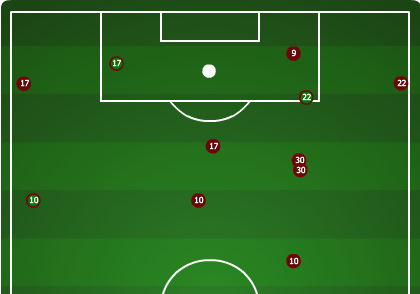 All of which takes us to Saturday night's performance against the Others. The team had 13 take-ons--down from 25 against Portland and only five of which were successful.

Two successful take-ons were in the box--again Bolaños and Smith--and eight were in the final third so at least the team is continuing to show some aggression but by the time the team made any of these attempts they were already behind in the score.

But take heart Goats fans. For the second consecutive game, Ryan Smith's foray into the box netted a goal. Ryan Smith's successful dribble in the box in the 52nd minute set up Paolo Cardozo's first goal as a Chivas USA player. Smith's play on the wings are only making it that much harder for coach Robin Fraser to pull him from the lineup, although we'll have to hope the injury he picked up in the match wasn't too serious.

[1]Take-ons are determined by adding the two numbers together.
[2]Including both league and US Open Cup Play