The More Things Change The More They Stay the Same

If you buy something from an SB Nation link, Vox Media may earn a commission. See our ethics statement.

Share All sharing options for: The More Things Change The More They Stay the Same

B Weld, an industrial strength cold weld bonding agent, i.e. glue, is so well-regarded that it's otherwise unbiased Wikipedia entry reads like an advertisement. Once applied, J-B Weld can withstand scalding temperatures of 500F and pressures of up to 3,000 PSI. That's not the only thing I learned from their FAQ page:

A: No. J-B Weld is non-toxic. However, we do not recommend consuming the product.

Need to re-attach a rusty hitch? Use J-B Weld. Need a dessert topping? Stick with Hershey's.

It would seem apparent that a bonding agent isn't a supposed to be a snack, but obviously they must have gotten that question enough that they felt compelled to answer it.

However in this day and age, what's obvious often gets overlooked. Club stability is key to MLS success. Chivas USA, following the buyout of the Cue brothers by Jorge Vergara, is only going to fall further from the pack if the new ownership blows the current squad up. Read more after the jump!

With the recent consolidation of ownership of Chivas USA, pundits (us included) have been asking what it all means. The only apparent answer is change. The ink on the contracts hadn't even dried before it was reported General Manager Jose Domene was out. Domene eventually tweeted otherwise, although the writing on the wall would say differently.

You know the routine: New ownership begets a new General Manager. A new GM usually begets a new coach and the whole process begets a roster makeover. And it all puts Chivas USA further and further away from the playoffs, let alone establishing that identity they've been trying in vain to accomplish in their seven years in America's top flight of soccer. 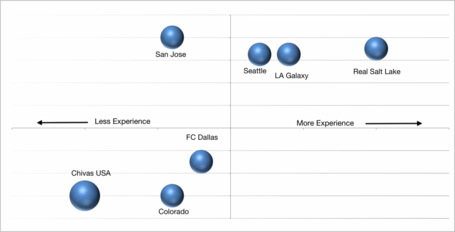 Doing some off-the-cuff math, I took the five top minute earners from each Western Conference side (the Portland Timbers and Vancouver Whitecaps excepted) and contrasted that with their points total.

It's not perfect, and there is one obvious outlier--San Jose Earthquakes--but otherwise the trend is unmistakable. Teams with a core of players that have been with the club for an extended period of time succeed; those that don't, don't.

Below is a comparison of Real Salt Lake and Chivas USA since Jason Kreis took the reigns at Rio Tinto. RSL didn't always come out on top, but the team's brass was patient and stuck with him. 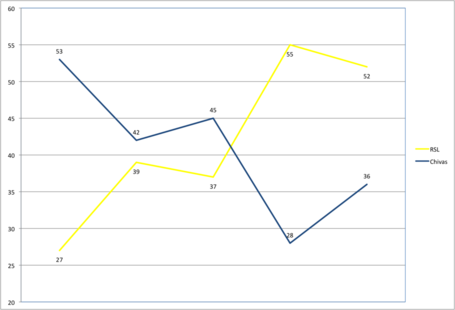 It wasn't until Kreis's third year that RSL really took off. But, as the saying goes, those who forget the past are condemned to repeat it. After all, teams, like glue, require time to bond together.