The Law of Diminishing Returns is an Economic principle that, stated simply, says there comes a point where you have put too expand one resource, but keep the others constant, your production will decrease. The classic example is a widget factory wants to speed up production so it puts 50 people on the floor but the factory floor can only hold 15 people. Therefore, at best 15 people are working while 35 people are drawing a paycheck from you but are, at best, doing nothing or, at worst, preventing those 15 people from getting work done by getting in their way, waiting to access a part or tying up the Internet.

Chivas USA needs goals. Through 25 league matches, the Goats are stuck on 20 goals, two standard deviations away from the league's mean of 36 (editors note: in layman's terms: that's bad). This squad has the chance to make history (of the wrong kind) for their offensive woes. So some serious head scratching was going on when Chivas acquired Shalrie Joseph from New England.

When you can acquire one of the best players in the young history of MLS for the relatively low fee of Blair Gavin and allocation money, it's almost a no-brainer. Joseph, on the other hand, plays the holding role and creates redundancies with Oswaldo Minda. Minda, after Dan Kennedy, may be the most important player on the team. Minda's partnership with Ben Zemanski as the two holding mids in the 4-2-3-1 was yielding dividend and they showed great chemistry. 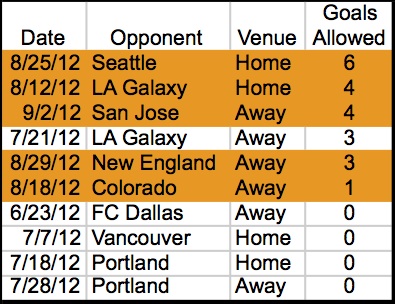 The defensive juggernaut we all expected never arrived.

As if you needed a reminder, check the table on the left. Here are stats from the MLS website. The rows in orange are the games with Joseph. The white rows are games before Joseph was acquired.

Not a typo:Since Joesph slipped on the Red and White, Chivas has allowed 18 goal and is mired in a five game winless streak. Previously, the team had allowed three goals and posted four clean sheets.

For perspective it wasn't until nearly halftime in Chivas's home game against the Montreal Impact--the team's 15th game of the season--before the team allowed 18 goals on the season. 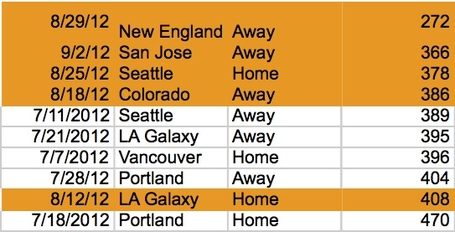 There are two ways of looking at this: the team's defense has improved or opponents are protecting leads and ceding possession. It's difficult to say really. New England is not a strong passing team and already scored three goals by halftime.

The other trend is Chivas is making more attempts on goal. Again, this has to be taken with a grain of salt: is it because of Joseph or because opponents are bunkering in to protect a lead?

Tonight's match, amidst the backdrop of a weekend of International play, will be the only MLS game. Against Seattle, Minda will be out on national team duty, so Joseph will have the d-mid role all to himself. With only one holding spot up for grabs, Robin Fraser's lineup may very well be up for the tasking of securing some much needed points.