2013 MLS SuperDraft: Looking Back at Center Back Selections

In thinking about which position a team should focus on in the MLS SuperDraft, we look at recent center backs taken early, to see what the track record looks like.

Share All sharing options for: 2013 MLS SuperDraft: Looking Back at Center Back Selections

Bobby Burling is distinctive amongst the six players to play center back for Chivas USA in 2012; Burling was the only person to play the position who was drafted by the team. The others were acquired by trade (Heath Pearce, Danny Califf), signed as a free agent (Rauwshan McKenzie), an international signing (John Valencia) or the inexplicable case of Shalrie Joseph.

The 2012 Rookie of the year, 2012 Defender of the year and the 2012 MLS Cup MVP all appear in this table. Two recent draft picks who have lower numbers probably deserve some explaining:

1. Ike Opara was limited to 35 games because of a foot injury. Upon his return he found himself benched behind the strong combination of Victor Bernardez and Jason Hernandez. With his Generation Adidas deal set to expire, San Jose traded him to Sporting Kansas City this offseason.

2. Andrew Jean-Baptiste had a heck of a combine, however precious few minutes with Portland's first team in his first season despite being their opening day starter last year. On loan to the LA Blues he had multiple clean sheets. 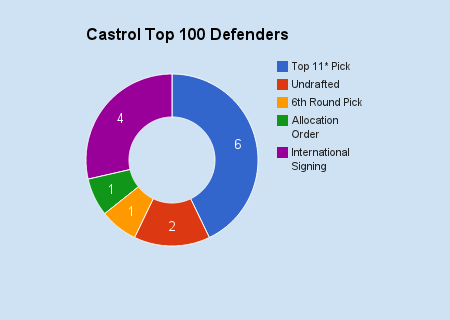 Digging deeper into the Castrol Index, we continue to see this pattern emerge.

The pie table to the left represents the 14 central defenders in the top 100 MLS players as ranked by Opta.

*For sake of tidiness I'm including Matt Hedges of FC Dallas who was taken with the 11th pick in the 2012 draft.

In conclusion, the MLS SuperDraft is fraught with peril and uncertainty. However, if Chivas wants to secure a position of need and obtain a player who can maintain his value years down the road, Chivas USA could do far worse than selecting a central defender.