It is Time to Deal with Shalrie Joseph

Share All sharing options for: It is Time to Deal with Shalrie Joseph

This week we've seen some ex-2012 Chivas USA players in the news with their new clubs. Casey Townsend made his preseason (and jet-lagged) debut with DC United. Meanwhile, former head goat Robin Fraser is staying in the barnyard (get it?), landing an assistant gig at New York Red Bulls. One name we haven't seen--as a current Chivas player or otherwise? Shalrie Joseph. He's still on the roster even though it's already been a week since El Chelis stated the Grenadian player, "is not part of my plans". 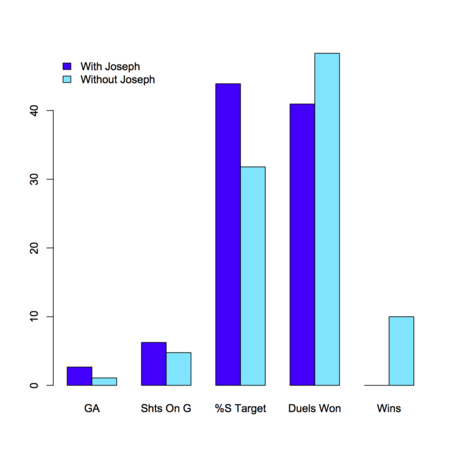 I'm of the opinion that Joseph, by virtue of being a decorated veteran of MLS deserves the chance to prove that he is a better player than we saw during his cup of coffee with Chivas last year.

The numbers with Joseph were not kind (see chart on right) and as such, we excoriated his play in his 12 games with Chivas (his return to New England the exception).

It's a reasonable to question how much blame Joseph should actually shoulder.

It's unreasonable to expect one player, regardless of how accomplished, to be able to pull Chivas out of their fatalistic downward spiral.

In the movie "Flight" (MINOR SPOILER ALERT)--which I haven't seen so I doubt I'm spoling anything here--Denzel Washington apparently saves an aircraft that in a simulation even engineers couldn't save. It's like we expected Shalrie to do what Denzel did and not break a sweat.

Keep in mind, Joseph also played center back with Chivas, something he occasionally did for the Revs. I'm certainly not going to advocate that shifting from a holding defender role to a center back is a huge transition--certainly not as drastic as moving Ben Zemanski to right back--but it wasn't as if Fraser played Danny Califf beside him to help break him in.

I also recognize it's imperative that every new manager makes the required personnel moves required to build the squad that can implement his or her vision. El Chelis will probably never again get the opportunity to make so many wholesale changes in the roster. So if he decides he's going to move Joseph, it should be done already.

So what's the holdup? Well we all have a pretty good idea why--and I'll get to that, but first I want to address criticism that Chivas USA is degrading Joseph's trade value. Let me state this bluntly: Shalrie Joseph has no trade value. At least not with his current contract situation. Only if Chivas were to pay a substantial amount of his contract or provide ample allocation dollars, no team would touch Joseph.

Let's remember, New England set the price. Which was a soon-to-be out of contract Blair Gavin. The Revs gave Gavin a handful of minutes and promptly cut him.

The truth of the matter is that unless Joseph were to agree to a new contract--unlikely--Chivas USA is going to need to negotiate a contract buyout similar to what the Portland Timbers did with Kris Boyd.

That's probably happening right now, but it's not Chelis and his 8-seconds-or-less that Joseph is likely negotiating with. Rather it's likely a Vergara associate, if not Vergara himself.

Clearly Jorge Vergara has proven to be a successful negotiator. But this isn't a situation where the LA Galaxy just bought their fourth DP and really need to get Juan Pablo Angel off their roster. In other words, the tables have turned and Vergara is actually at a disadvantage here because Joseph has the leverage. Stonewall him all you want and Jorge, the guy is still collecting his salary.

Shalrie Joseph is going to get paid, but it would be sad if a player of his accolades has this as his final legacy.