MLS Sunday: a walk in the park

England invented the game. We got a very exciting final weekend of MLS play; they got to watch the Jacksonville Jaguars up close. I'd say we got the better end of the deal.

Share All sharing options for: MLS Sunday: a walk in the park

Here's your MLS Playoff bracket--go hit the office printer and place one in everyone's cubicles, right on top of their TPS memos.

The New York Red Bulls controlled their destiny headed into the weekend. With a 5-2 win over the Chicago Fire, the Red Bulls won their first piece of hardware ever. How fitting that it is Mike Petke lifting the Supporter's Shield. The Fire, started the season so slowly and just fell short of the playoffs. Montreal, losing 1-0 to Toronto on Saturday, advances heading to play the Houston Dynamo in the knock-out round.

With Toronto's win and a Chivas USA losing to the Portland, Chivas will now finish 18th only above the record-breaking (and not in the good way) DC United.

DC United will get the first of the various and sundry MLS draft pick, higher probability of weighted lotteries and, courtesy of their US Open Cup win, will be inserted into CONCACAF Champions League play with all that that entails (read: $$$$).

Like Chivas, but for completely different reasons, there likely won't be a repeat of the team's Golden Boot award winner.

Juan Agudelo is headed off to Stoke City but he's got at least one more game left to play as the New England Revolution beat the Columbus Crew in back-to-back games to advance to the play-offs. Agudelo scored the game's sole goal in tantalizing fashion. Allegedly the New York Red Bulls are getting a piece of Agudelo's transfer fee as are the Revolution. Apparently not getting a cut? Chivas USA (again, allegedly).

Speaking of Agudelo and Chivas, an old friend weighed in with his thoughts.

Seattle and the Galaxy held court for the final game with a chance to avoid the knockout round. Seattle had a milestone but failed to win. But they didn't lose either. Is it time for MLS to invest heavily into goal-line technology? 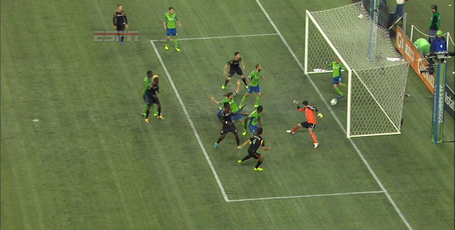 Bear in mind this comes from a man who scored a goal with pink-eye.

This photo, courtesy of i.imgur.com, kindof looks like it sort of, maybe, just barely crossed the line.