Who will step up this year and get the goals?

Chivas USA will carry their MLS-high 14 game winless streak from 2012 over into the start of 2013. Few of the problem areas were as noticeable last year as Chivas' abysmal goal tally. In 2012, MLS Teams scored a median 1.3 goals per game. Chivas? A paltry .71. To be fair, Chivas de Guadalajara right now is sitting on four goals in five matches (.80). 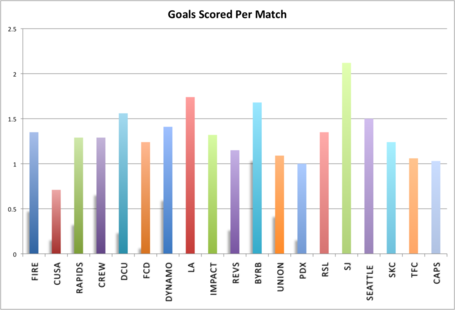 Once again, Chivas will be heading into a new season without one of their leading scorers. Except this time it's more than just your average cleaning house: 13 of the team's 24 goals were scored by players no longer with Chivas USA (Assuming Shalrie Joseph is indeed not returning to the team).

With the season nearly upon us, let's project this year's Chivas USA Golden Boot winner:

Why he could be the one: Easily the most recognizable player on the team, Agudelo has been a frequent member of the U.S. Men's national team. He has quickness, agility and a nice first touch.

What might hold him back: Agudelo is nearly out of contract. With an offseason spent with Celtic and West Ham, its not inconceivable that his mind might be elsewhere.

Why he could be the one: Bolaños lead the team in shots in 2012 despite playing on the wing and never solidifying his spot on the roster until well into the season. He is a good candidate, especially if he's allowed to play up front without having to track back as much.

What might hold him back: Being slight of frame, he can struggle against physical play. Worsening matters is Bolaños has earned a reputation as a diver.

Why he could be the one: He only got into five games last year for Chivas but the SoCal native brought fluidity and fierceness to a stagnant attack last year. His field time coincided with Chivas' greatest offensive output last year.

What might hold him back: There is so much that is unknown about Bowen, most notably the fact that he's played a grand total of eight games in two seasons for Chivas.

Why he could be the one: Correa's mix of speed, agility, and strength make him the perfect poacher.

What might hold him back: Like Bowen, it's really difficult to understand why the team didn't put him out there more last year. Correa's physical talents make up for a lack of technique. Like most of Chivas' forwards, Correa struggles in a single-striker set up where he's required to hold up the ball.

Why he could be the one: The former GA player has quietly scored five goals in his career--two of which were against the March 2nd opponent Columbus Crew--despite never being the focal part of the offense.

What might hold him back: It's a difficult thing to ask a winger to come in and get in the scoresheet. Despite being right footed, Avila has been deployed on the left flank. Only one player scored a goal from the left flank last year.

Why he could be the one: Sueno is in camp this year unlike last year where he missed the first month and a half of last year doing Olympic qualifying.

What might hold him back: He just seems perfect for the wingback role. He'll be able to provide width to the field but it just seems really unlikely that he'll ever be advanced far enough to make a serious run at goal.

Why he could be the one: It's a perfect fit. Salgado is a Mexican-American who played for Chivas de Guadalajara. In two seasons with the Whitecaps, Salgado has hardly ever seen the field (a sum total of 900 minutes over the course of two seasons). In contrast, Casey Townsend has played more minutes in one Robin Fraser coached season than number one overall pick Omar Salgado has in two. With an abundance of attacking options, that's unlikely to change any time soon.

What might hold him back: The whole "We don't have him on our roster yet" bit.

Who do you think will be the Goat's top trigger man? Take the poll and leave your thoughts below!