We take a look at the defensive performances in the league last month across three different categories.

The season's young and recent history (i.e. 2012 LA Galaxy) shows the first month is hardly representative of a full MLS season. But I thought it would be fun* to compare the metrics we've put together through the first month of season and see what we've got.

DER--or Defensive Efficiency Rating--is our attempt to take several variables, throw them in a blender and make a smoothie.

Perseverance Rating gauges a goalkeeper's performance based on his workload. A goalkeeper might have a sterling save-percentage but that might be tempered by the fact that he faces little action. It's also a good way to determine if a team's defensive reputation is being burnished by a Superman between pipes (I'm talking about you Dan Kennedy!)

I took the rankings of each team and placed it on a scatterplot. 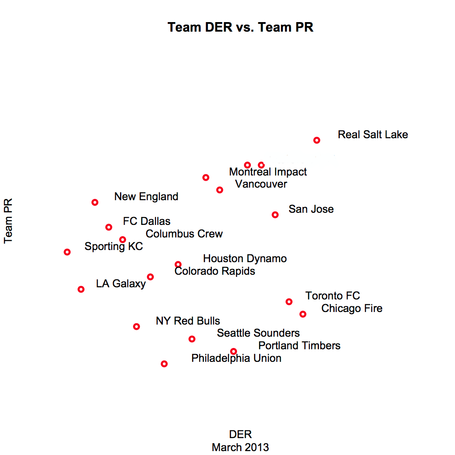 Is the correlation between the metrics? Yes, but it's a very, very slight correlation. In some ways this makes sense--after all one stat is merely on goalkeeping and the other merely includes goalkeeping as one of it's many components.

Finally, let's just look at the old fashioned stats. I gave each team a grade determined by goals allowed with the average/median goals (5) being a C+ and adjusted accordingly. Intriguingly the best team (New England Revolution) and the worst (Chicago Fire) aren't particularly great or bad at any of the other stats.

What conclusions can we draw?

What do you think? Leave a comment below! For more in-depth soccermetric discussions, join the Soccermetrics group: https://groups.google.com/d/forum/soccermetrics