Are Chivas USA players coming from and going to "bad" leagues at a high rate?

Share All sharing options for: Thought experiment: Are former Chivas USA players as bad as their collective reputation indicates?

Chivas USA have not been a very good team the past few years. That fact cannot be disputed. However, lately, as I've kept tabs on what recent former Chivas USA players have been doing, I've wondered if the signings in recent years, many of whom have come and gone at a rapid rate, tells us much regarding the general quality of the players who have come in.

Of course, thinking about what league a player played in before or after playing for the Goats is not objective. Great players may go because they are retiring, or because of personal reasons. Maybe they left because they wanted to -- maybe they wanted to stay but weren't able to. And there are no good ways to really determine which leagues are better than others. Is it better to be in a third-rate European league or a second-rate South American one? What about a first-rate Central American league? And what's the gulf in quality between the three pro American leagues? Sorry, I'm not going to make those judgment calls here.

Still, in what may be the nerdiest thing I've ever written on here, I present the work I've cobbled together of late. I've examined all of the players who have played for Chivas USA from 2011-13. I picked those years because there's an archive of information on those players on this website, and because most of them are still playing and in their prime playing years. I did not include players who were signed after the 2013 season, since they (or nearly all of them) currently play for the Goats, and I didn't want to skew the current numbers.

Here's a table of all the players who fit under the timeline (remember, 2011-13 with CUSA):

It's interesting looking at all that information, isn't it? Well, if you are still with me, you probably think so. Let's look at some breakdowns of players whereabouts before and after Chivas.

First, let's see where the U.S.-based players came from before Chivas: 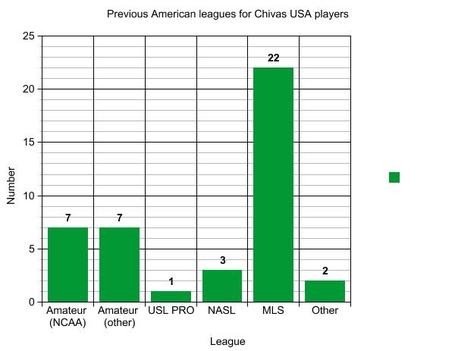 Contrary to the idea that Chivas didn't really look to MLS to pick up players, the statistics indicate otherwise. Of course, breaking down the comparisons between the Robin Fraser era and the Chelís/Real era could prove illuminating, but that's some nerdery for another time.

Besides the strong MLS connection, the USL connection is very weak, which was a surprise to me. It feels like Chivas are signing players from that league all the time, but in fact, that has been a very recent phenomenon, not even one that stretches back the past three years.

Let's see where CUSA players came from before joining the club outside of the United States: 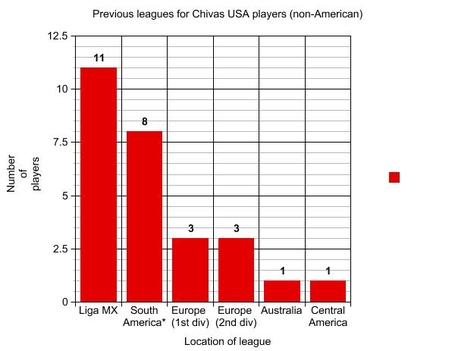 This graph is no surprise at all, really. The overwhelming majority of players coming in from abroad have come from Latin America, with Mexico alone accounting for close to half of the total.

Ok, so for the players who moved on, where did they go right after Chivas? Let's look at this graph: 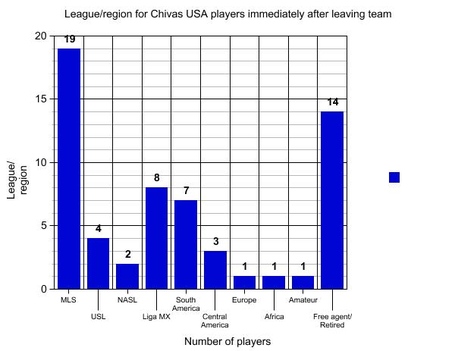 Again, MLS dominates by a substantial margin, with the combined category of free agents and retired players coming up next. On a macro level, what does that tell us? A substantial portion of players who moved on were coveted by MLS teams, while a smaller but still substantial portion of players either retired or had difficulty even finding a new club. Basically, the trends diverge, with Latin America overall being the third main choice for players.

Ok, so what's the picture today? Are all the players dropping into the lower leagues? Retiring or having trouble latching onto a new team? 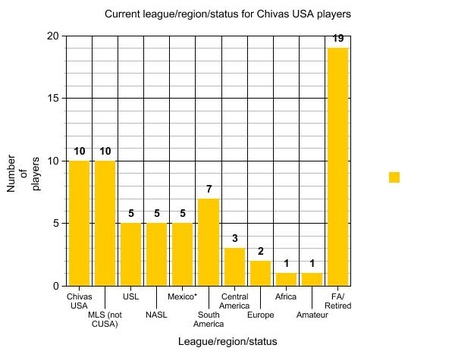 The same divergent path manifests itself, with CUSA and the rest of MLS combined edging out free agents and retired players for most popular "destination." However, in the interim, the rise of more teams and more infrastructure poured into American lower league soccer has probably given former Goats a chance to play there, as there has been a spike in the number of players in USL PRO and NASL.

In case you are wondering what the breakdown between current free agents and retired players is, it's basically split down the middle: 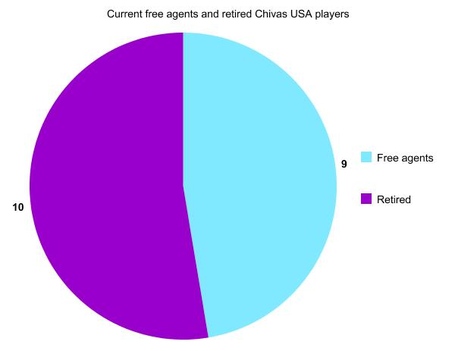 We tend to look at the career path for players of a certain team on an individual level, and for good reason. There is context surrounding every player's move, both in and out of the club, whenever that happened. These numbers aren't meant to make any sweeping statements about the quality of players, but it is interesting that despite Chivas' status near the very bottom of the league standings the last three years, they still have a fair number of players who make their way in MLS as well as other decent leagues around the world and indicates the players themselves can't bear the full brunt of criticism of on-field performance of late.

Of course, we know that, what with the frequent coaching changes and the constant front office and ownership turmoil. But it's worth reinforcing the notion that given more stability at the club, CUSA teams in recent years may not have been title contenders, but they likely would have been better than what we witnessed. In that respect, consider this piece a plea to the next owners to have a good plan and to make stability (while building for positive improvement) a hallmark of their plan for the team. A little TLC could go farther than one might think.

And it's worth noting that these figures haven't been compared to other MLS teams roster turnover and leagues before and after playing for their teams. I'd love to see some comparisons, but there are only so many hours in the day, and I don't have the same knowledge base of other teams. Maybe some other nerdy souls will make similar investigations at some point.