Feeling good after a goal explosion from the Goats.

Share All sharing options for: 10 Observations from Chivas USA's 3-1 win over Colorado Rapids

Rejoice. Chivas USA were finally able to snap their eight game winless streak with a 3-1 win against the Colorado Rapids. It was a game where new faces made their presence known and the win gives the Goats a bit of much needed confidence going forward.

Here are 10 Observations from Sunday's game:

1. Rivero gets his first start - It's only fitting that Martin Rivero was given the unique opportunity to get his first start against his former team. He plays with a bit of South American feistiness and his high motor showed. The problem was that he was a CAM in name only as was forced into the role of helping defensively, thus limiting his impact. On the day, Rivero seemed to prefer the longball/chip attempt into the attack and, as a result, connected only 21 of 33 passes (63%). That being said, Rivero was able to connect with Erick Torres in the box to give CUSA the 1-0 lead.

2. Chavez may be small, but his game isn't - The moment he stepped on the pitch, you could immediately see Marvin Chavez was gonna make things happen. It's hard for me to see him play and not compare him to a Miller Bolanos/Chukwudi Chijindu hybrid (two of my favorite players in CUSA history). Based on that description alone, It doesn't take a genius to realize I liked what I saw from "the guy that took Bofo's #10 jersey".

Chavez's two goals demonstrated the speed, IQ to be aware of his surroundings, and soft touch. How fast was Chavez's run on his first goal? I took the time to nerd out and give him a very unofficial 40 yard time of 4.75, which is pretty awesome (and probably very inaccurate) considering he's dribbling a ball. I'm incredibly curious to see how Wilmer plans to use him - will he be CUSA's super sub? Will Cabrera move Rosales more into the CAM roaming role and plug Chavez in to the RW opposite Barrera?

3. 3 Goals, 1 Game - CUSA hasn't scored more than 1 goal in a game since their season opener. The scoring outburst, while a bit reliant on the counter and unprovoked Colorado miscues, should definitely improve the morale and confidence of the team. Its a bit odd that the scoring outburst came in the week the team sent Bofo and Luke Moore packing, two players most believed would have a key role in the attack

4. When is laundry day? CUSA still without a clean sheet - How appropriate (and by appropriate I really mean unfortunate - they kinda go hand in hand these days) is it that the Goats blow their chance for a long-awaited shutout by giving up a goal in added time? Going back to last season, the team has now gone 16 consecutive games since their last clean sheet (or if you want an uglier stat, CUSA has one clean sheet in their last 24 games). The streak gives you perspective as to how devastated this team was after giving up that goal in extra time.

5. Lack of Defensive Communication/Marking - Despite the great result and effectively holding Colorado scoreless for 90 minutes, I wouldn't get ahead of myself and say the defense has improved. Don't get me wrong, the defense played with enough heart to stop COL from capitalizing on their 16 shot attempts, but it appears the same defensive issues are plaguing this team. They had trouble with organization, attackers getting behind the defense, and multiple defenders leaving their zones to converge on 1 attacker like a swarm of bees. Lucky for CUSA, COL was unable to take advantage of those lapses. The big thing here is that the defensive pace issues were not the Achilles heel this week and that's an accomplishment considering Colorado is a team with speed up top.

6. COL Picking on Toia. It appeared Colorado had a specific offensive plan as 50 percent of their attack was directed at Donny Toia's left side of the field. Toia had trouble at first, being tested continually on staying behind Colorado's continued use of long balls/through balls and he got beat on a few gambles. That being said, with the help of Carlos Bocanegra and a dropping Leandro Barrera, Toia regained his form and was able to keep the Rapids from doing much damage. Unfortunately for the young left back, Tony Lochhead appears to be nearly fit as he was on the bench for today's game so it appears Toia's starters minutes will be yanked in favor of the elder.

7. A Close Call for Rivero -  In the 61st minute, Martin Rivero attempted a challenge that could've led to a 4th red card in four straight weeks. Lucky for the him, the ref, who had been a bit soft on his calls, thought otherwise and CUSA's Red Wedding appeared to have ended at 3 (1 more than the Stark 2).

8. Cubo Shushes the Ref - After Chavez' first goal, the team got together in their customary celebration huddle. The ref immediately tried to separate them to prevent time wasting, but Cubo was having none of it. It got to the point where Cubo was more intent on shushing the ref, than actually celebrating.

9. Will Chavez be the partner Cubo is looking for? I enjoyed his game so much that I had to include a 2nd point. In only 33 minutes of play, Chavez shot himself into 2nd place on the CUSA scoring list and snapped the 9-game streak of Cubo-only goals. What's interesting is that on both of his goals, Cubo was the one heading him the ball. In this game, he was able to utilize the numbers game and Chavez's speed effectively and that's a good sign for a team that relies so much on the counter.

10. Wilmer doesnt park buses - Sure, he went with his now customary 4-2-3-1 formation, but he had enough faith in his defense to use all his subs on offensive adjustments instead of bringing aboard defensive help to plug up the goal. In the 57th minute, right after Cubo put the team ahead 1-0, Cabrera went ahead with bringing Chavez in for Agustin Pelletieri. He made his final two offensive subs with the team up 3-0 with only 10 minutes to go (Mauro Rosales in for Barrera and Ryan Finley in for Torres). You could make the claim that he wanted to give Rosales some in game action to get him back in the swing of things, but then again Lochhead was also available. 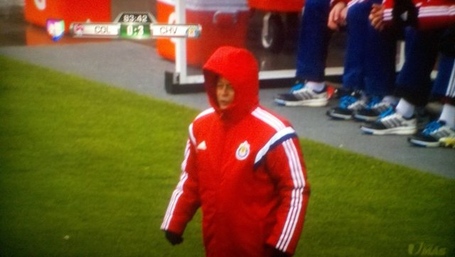