Teamwork comes together nicely for the Goats in the altitude.

Share All sharing options for: Week 10 How They Scored: Marvin Chavez chips and Cubo Torres dips

This goal was all about having the situational awareness to switch the ball away from a crowded area. Oswaldo Minda noticed the lack of space to work with on the left and his switch over to the right gave the Chivas USA attack new life. You'll actually notice Martin Rivero see the same opportunity and give Minda the signal to switch.

The ball makes its way over to an open Marky Delgado on the right. His graceful first touch finds the trailing Rivero, who in turn, sends over a perfectly placed ball into the box and onto a diving Erick Torres for goal.

Who's to praise? There's no denying this was a well-deserved team goal. The fluidity and efficiency of the attack make it one of CUSA's nicer goals on the season and features an unlikely combination of players. Starting with Minda's switch from the halfline, the ball was only touched five times between four players in a total of eight seconds. Kudos to Minda for the awareness to switch, Rivero for directing the offense (and the cross), and Marky for the great first touch to prevent the defense from setting up and the awareness to get himself open in the first place on the right flank. Needless to say, great ability was shown by Cubo to finish against poor Colorado defending.

Goal 2 - Chavez Outsprints the Colorado Backline on the Counter for a Chip Goal. (67th Minute, 2-0 CUSA)

With Colorado pressed up on the attack, Colorado defender Marc Burch sends a ball into the box only to have it headed out of trouble by Cubo. The clearance is fortunately placed between Marvin Chavez and empty space and like a cheetah looking for it's first meal of the day, Chavez pounces.

Chavez times his touch by allowing the ball bounce once and with Marvell Wynne coming up to contest, Chavez slyly heads the ball into space. It's now a footrace between Wynne, who now has his back turned away from the play, and Chavez. Clint Irwin comes out to close the angle, but Chavez simply chips it over for goal. An outstanding debut goal by the Honduran.

Who's to praise? Lost in the play was the defensive pressure provided by Rivero to force Burch into making a poor service into the box. In the end, though, this play was all Marvin Chavez. It only took him 10 minutes to show CUSA the speed, awareness, touch, and "garra" that he brings to the table.

That speed, man. That speed. (Someone put some "Chariots of Fire" to that.)

Cubo wins yet another aerial duel and the ball heads over to open space in the attacking side of the field. The ball takes an tricky bounce and with Chavez fast approaching, Burch is forced to try and make a play on the ball, yet he has no momentum to get any power on his pass back to the keeper. Taking advantage of the mistake, Chavez once again finds himself behind the defense and once again 1v1 with Irwin. Without wasting any time, Chavez takes a first touch chip for the team's 3rd goal, his second goal in nine minutes.

Who's to praise? Chavez does a good job of putting the necessary pressure on defenders and forcing them into mistakes. Instead of getting into an aerial duel with Burch, who has 6 inches on him, Chavez decides to let Burch leave his feet and wait to get the first step on the ball's trajectory. Chavez wins.

With about 2 minutes left in stoppage time and CUSA up 3 goals, Colorado engages in a final push to get on the scoreboard. The numbers look to be in CUSA's favor. 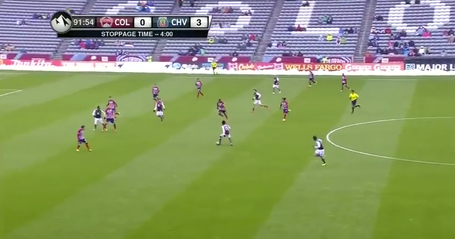 Colorado forward Charles Eloundou appears to be set to pass off to Dillon Powers, who's calling for it, but Mr. Hustle himself, Mauro Rosales, rushes in to deflect the ball only have it take an unfortunate bounce to Deshorn Brown. Brown gives the ball an additional tap forward to get by Burling and scores a beauty of a goal.

Realizing there's no point to celebrating a goal in extra time while losing 3-1 at home to one of the league's worst teams, Brown thinks twice about his celebration and instead rounds the corner

Who's to Blame? On Brown's shot, the ball is actually deflected by Bobby Burling, essentially giving the ball more lift than intended. As a result, it goes over a diving Dan Kennedy for goal. I would've liked to think that DK could've made a save on Brown's difficult angled shot had the ball not been deflected.

This one was unfortunate and the team really did deserve that elusive clean sheet. While they were a bit cramped up in the middle, the defense had enough numbers to compensate for any mistakes. In the end, the issue wasn't necessarily due to a mistake, but instead a series of fortunate and unfortunate deflections that dictated Colorado's only goal.