Week 9 How They Scored: Chivas USA rack up another PK, but high line, lack of pace dooms them again

Are Chivas actually being too aggressive in their approach?

Share All sharing options for: Week 9 How They Scored: Chivas USA rack up another PK, but high line, lack of pace dooms them again

His seven total goals rank 2nd in MLS, but then again his four PKs are tops in the league (tied with Colorado's Vicente Sanchez). In any case, Erick Torres is still 100 percent accurate from the spot, which is a nice upgrade from the chaos we saw last season when Jose Correa and Tristan Bowen would argue over who was gonna botch the PK. As far as trends, Cubo has always gone right or center, but then again he's mentioned in interviews that he does his homework and his shot depends on goalkeeper tendencies.

Who's to praise? Cubo's getting all the headlines for knocking home all of the goals, but it's only just that we give a bit of praise to the guy that got him there. In this instance, it was Carlos Alvarez. Alvarez, who has shown great improvement in his decision making in the final third, chips the ball over the defense and by following the play, is eventually taken down in the box.

The Houston Dynamo's movement off the ball had been giving Chivas USA fits all game long and really tested their organization in the back. You'll rarely see a player in orange make a pass and then stand still. In this case, Houston RB Kofi Sarkodie passes off to Boniek Garcia in the middle and takes off down the sideline, taking Donny Toia with him. Boniek finds Will Bruin and five CUSA players converge which not only leaves Corey Ashe open on the left, but leaves Brad Davis in open space as well. Bruin tries to get the ball to Ashe, but the ball takes an unfortunate deflection off of Avila and right onto Davis foot. A simple tap of the ball to the left allows Davis to leave Avila and Burling in the dust.

Who's to blame? There's lots of ball chasing and reactive decision making going on with this defense. A team with enough speed and athleticism can get by with it, but unathletic sides like CUSA will be made to look like a lost flock of goats.

How did Brad Davis get so wide open? Check out this run. By running up field, Davis not only gets Boniek Garcia wide open in the middle, but he also found himself where he needed to be to capitalize on CUSA's mistake. It's hard not to appreciate players willing to trail on plays.

My goodness what a rocket.

With CUSA playing such a high line (uh oh), Houston was doing a fantastic job of pressuring the Goats into making costly mistakes in dangerous areas. In the 32nd minute, Jermaine Taylor is able to take possession away from a swarmed Cubo and Houston starts the quick counter.

At this moment, CUSA is in trouble: 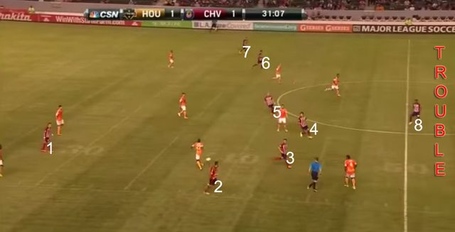 You'll notice eight CUSA players on the attacking side of the field, meaning there's only two players back and they happen to be the two slowest players on the pitch (Bobby Burling, Carlos Bocanegra). The moment Boniek Garcia fires a long ball switch over to a streaking Giles Barnes, Houston finds itself in the advantage: Three quick attackers against two lumbering center backs. 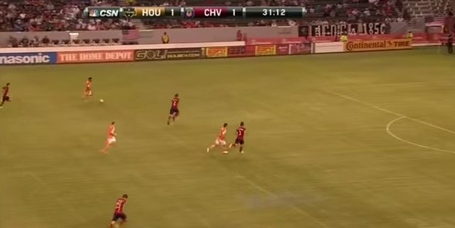 All it takes Barnes to get a look is to simply cut inside of a backpedaling Burling and rip a brilliant shot in from about 20 yards out.

Who's to blame?
While Leandro Barrera's give and go attempt with Cubo was a good idea, his run also crowded the middle and his pass was a bit behind Cubo.

Aside from that, this was clearly the product of CUSA's ongoing problem of playing a high line without fullback help. Wilmer Cabrera's been accused of being too defensive in his approach to the game, but in reality, this aggression is hurting this team's prospects. I applaud the effort and aggression in the attack, but this team has no business playing a high line, even at home.

As mentioned earlier, Houston's continuous movement both on and off the ball kept CUSA guessing all game long. In this case, there was a bit of combo ball on the left wing.

Corey Ashe completes his give-and-go with Andrew Driver along the left wing, and Ashe completely out-paces Carlos Alvarez in a footrace to the box. Ashe eventually sends an uncontested cross into the box and Bruin makes a ridiculous trap on the ball (I'm pretty sure there was a magnet on that foot). Bocanegra's momentum allows Bruin to turn the other way and has a clear shot on goal.

Who's to blame?
Someone's gotta close out on Ashe and while the awareness and effort were there from Alvarez, he just couldn't hang. I like Bobby Burling and as I mentioned in my 10 observations of the game, he's a solid CB in an organized defense that isn't pressing so high. Unfortunately, that's not the case and his lack of pace is a huge liability in cleaning up what the midfield couldn't. You have to think a CB with pace like Zavaleta could've potentially cleared that ball from trouble (assuming he wasn't pressed too high to begin with).

But then again, this play had more to do with Alvarez being unable to effectively mark Ashe. It was a beauty of a trap by Bruin and had that ball had any bounce off his foot, Bocanegra and Toia would've had a better shot at contesting.

As if it's some cruel joke, Tim Melia only got the start because Dan Kennedy was shown red last week for the same offense. This left a cold, but hungry, Trevor Spangenberg to sub in and get his first appearance of the season. Spangenberg guessed wrong on the PK and Barnes gave Houston the goal it was looking for, putting Houston up 4-1.

Who's to blame? Burling's blunder.

Play starts with Houston tossing the ball behind CUSA's snow-shoed backline. Bruin now finds himself in a loose ball footrace with Burling. It appears Burling tries to back pass the ball to Melia, but the touch is so poor that its essentially a lead pass to Bruin.

At the moment, CUSA is down 3-1 with about 25 minutes left to play so there's a dilemma here. Melia could either stay on his line and hope he can make a save or he could come out to take away any angles from Bruin, if not regain possession altogether. He chooses to come off his line, but Bruin's movement leaves him no choice but to take him down. The only issue I have here is that had he stayed back, he would've had the same chance of making a miraculous save as he would've had in a PK situation, only the team would've still had 11 players on the field.

You can't blame him for the decision though. The ball was in no man's land and he had a decent shot of contesting.