A combination of bad refereeing, poor play, and inexperience does the Goats in.

Share All sharing options for: 10 Observations from Chivas USA's 3-0 loss to the Philadelphia Union

1. Minda Sees Red, Joins the Club - It marks the 6th red in 13 games, meaning the club gets a player sent off every other game. That's obscene and its especially frustrating considering the reds have been consistently controversial. In this case, Minda does his usual intense pressuring, but by swinging his foot out in the same way kids use their leg to slyly kick a friend in the butt, Minda gets a direct red. That's obscene, folks. It really is. I still don't know how that was seen as a red, let a lone a yellow. I honestly don't even see a foul there.

As mentioned by Alicia Rodriguez during the match, this marked the first red card of Minda's MLS career and it's pretty surprising it took the yellow card magnet 2.5 seasons to achieve the feat.

2. The Phantom Free Kick - The penalty awarded to Philadelphia wouldn't have happened if it wasn't for the phantom call by referee Allen Chapman. The call was eventually explained as a 6-second call on Dan Kennedy, leading to a indirect FK in the box and an ensuing penalty after the ball deflected off of Martin Rivero's arm.

The crazy thing is that the rule is rarely ever enforced and in the head-scratching cases that it is, it's usually to prevent time wasting by the team that's ahead. Usually refs don't call that unless it's an blatant attempt to kill the clock. What's remarkable is that in this case, the game was tied at zero and only 30 minutes into the game. Since there is no video evidence of the play (the broadcast was showing a replay during the incident), there's no way to confirm the call.

The goal marks Philly's 4th PK conversion on the year and ties them for 2nd with none other than CUSA (because bad offenses have to score somehow).

3. CUSA had to come out swinging and they didn't. - After fiddling around with only 25-30% of the possession in the first half against Portland, you would think CUSA would try to come out of the gate strong against Philly. They responded by not applying an ounce of pressure early, preferring to drop back and contain, and finishing up with another sub-40% possession result. In fact, other than the last few minutes of the first half and the opening 5 minutes to start the second, the flow of the game was absolutely dominated by Philly. 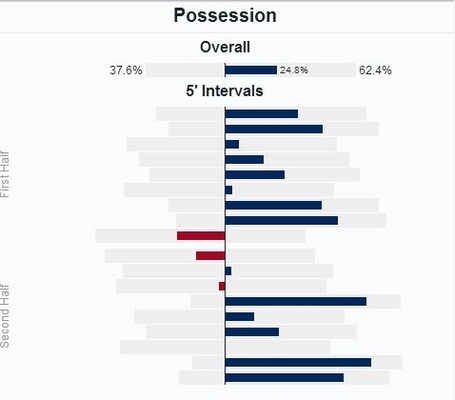 4. How bad was the possession? So bad that RB Eric Avila continues to be the leading touch man for CUSA. On Saturday he led the team with 76 touches, followed by 3 defensive-minded players: LB Donny Toia was second with 64, DM Minda with 47, CB Eric Zavaleta with 46.

5. Consider the Inexperienced Lineup - The starting lineup featured a youthful contingent of players, some of which were featuring at trial positions. The average age of the 10 outfield players was 24 years of age: Toia (22), Tony Lochhead (32), Zavaleta (21), Avila (26); Rivero (24), Minda (30); Leandro Barrera (23), Carlos Alvarez (23), Marky Delgado (19); Erick Torres (21). With Lochhead and Minda taken out of the equation, the number drops to 22. There's no doubt that the team's youth and inexperience has plenty to do with much of the team's current struggles.

6. Wenger's Offside Interference on the 3rd Goal - On Philly's third goal, Andrew Wenger was offside and although he didn't touch the ball, he was positioned in a way that prevented DK from making a full attempt at a dive. Law 11 states that offsides interference occurs in two situations:

Wenger clearly interfered by being in a position that prevented DK from "being able to play the ball clearly by obstructing [his] line of vision." There's absolutely no question about it.

The bottom line is that losing by two goals is less demoralizing than three.

7. DK Ties the Club Appearance Record - He now joins Jonathan Bornstein and Panchito Mendoza with 123 club appearances and will most likely break the record next week against the Galaxy. It's a pretty big accomplishment considering the amount of roster turnover the team has faced and at the same time, demonstrates the loyalty Kennedy has shown the team and fans by signing an extension to stay with the club. Bornstein and Mendoza experienced some form of success with Chivas USA, while DK has endured so much that his 123 games probably feels like 500.

8. Two Straight Home Losses After a Bye Week - Let me get this right: The team picks up 4 points in 2 consecutive away games (scoring 4 goals), and get's a nice bye week to prepare for the home-stand. They respond by getting destroyed by two struggling teams at home and being outscored 5 to 0, showing no sign of preparation whatsoever.

I hate to say it but there's something very Vasquez/Fraser-esque about Wilmer Cabrera. He seem's like a stand-up guy and has a high soccer IQ, but the team seems to have fallen apart on him. Not many coaches can have the same motivational influence as a Chelis or Preki, but this team needs to find it somewhere. On the other hand, let's remember how young this team is. No one was expecting much in 2014 to begin with.

9. Wanna Boost Your Offense? Come to Stub Hub - On Wednesday, Fanendo Adi scored his first two goals of the season and Conor Casey repeated the feat on Saturday. CUSA's poor play has resurrected 2 struggling players on dying offenses in a span of 4 days and have officially become the team opponents can circle on their calendar.

10. Assessing the lone legit goal : Casey's Cross - If CUSA fans want to feel any sort of silver lining, its that the final score shoulda/coulda/woulda been 1-0 if it wasn't for a few questionable calls. That being said, let's assess the lone legit goal of the game: Casey's diving header.

The play opens up with Rivero losing possession while trying to heel flick the ball past the Philly defender. A series of passes later, not only does the hole become open, but the left wing does as well. How did that happen?

Minda over-commits to put pressure on the Philly player receiving the ball, only to leave the hole open.  In normal situations, with Avila pressed so high up on the wing, it become's Minda's responsibility to fill in but since he over-commits to pressure the attack, Cristian Maidana's left wide open on the left. Keep in mind that CUSA's other acting-DM, Rivero, lost the ball at midfield and is now chasing. The play is finalized with a nice cross from Maidana to an unmarked Casey, who is leading the way right through the CUSA defense for the header. Nice play on their part.

Dirty Laundry Watch: CUSA has now gone 19 consecutive games without a clean sheet, or one in their last 27 games.

More Ineffective Crosses - Despite the ineffectiveness of the cross, CUSA continues to rely heavily on it. They outcrossed Philly 22 to 20, but only completed 2- a conversion rate of 9 percent.