Wilmer Cabrera freshened things up, and a better performance came as a result.

Share All sharing options for: 10 Observations about Chivas USA's 1-1 draw against the LA Galaxy

After a tough homestand that left the Goats a bit humiliated and dejected, not much was expected against their cross-hall rivals. That all changed after Chivas USA came out strong and held on for a 1-1 tie in a Sunday evening encounter at StubHub.

Here are 10 Obsevations from the match:

1. LAG's Lone Goal - Considering the backline, If you told me the LA Galaxy were gonna score just 1 goal, I would've bet that it would've come via some sort of counter. It wouldn't have been surprising to watch a guy like Gyasi Zardes outrace a backline including Tony Lochhead, Carlos Bocanegra, and Bobby Burling. Well, Zardes did score, and it came off of the one defender with speed: Donny Toia.

"I saw the cross and it was a short defender who was playing me and I knew I could just get over him and get it on frame." - Zardes, on describing his goal.

With the ball on the right flank, Stefan Ishizaki was doubled by Bocanegra and Lochhead while Burling was marking Samuel by the near post. This left Toia all alone to mark Landon Donovan and Zardes. Ishizaki ditched the cross and instead pass the ball to Marcelo Sarvas in open space at the top of the box. Sarvas then served the ball towards the 6-yard box and the springy 6'2" Zardes out jumped the 5'8" Toia to head in the equalizer. Toia had no chance and neither did Dan Kennedy.

2. Wilmer Subbed Out the Experience - I struggle to find reasoning behind Wilmer Cabrera's substitution patterns. Against the Galaxy with the game still in the balance, he subbed out three of the most important players on the roster in a span of 13 minutes. In the 69th minute, Cabrera subbed out Leandro Barrera for Kris Tyrpak. While the move was a bit strange considering Barrera was playing well up top with Cubo, you figure Tyrpak would provide that high-rate pressure on the wing and switch the formation to a more conservative 4-5-1. Not the best move, but somewhat understandable.

The following two moves were a bit more perplexing. In the 78th minute, Mauro Rosales came off for Marky Delgado and four minutes later, Martin Rivero was subbed out for Carlos Alvarez. While it's expected the team would make moves to try and preserve the tie, Cabrera essentially subbed out three of the team's most important players. On top of that, he traded the experience out of the squad for three of the team's youngest players. That's quite the risk considering the team was trying to hold on to a tie in the SuperClasico. From a tactical perspective, Rosales has proven to be great in his defensive support, while Rivero is much more defensive minded than Carlos Alvarez. Its a crazy mix of defense for offense and offense for defense.

3. The Change in Formation - After the debacles against Portland and Philly, CUSA needed to do something different and Cabrera responded with a new look lineup. Instead of the usual 4-2-3-1 formation that consistently left Cubo all alone to make something happen, Cabrera switched things around and went with a more traditional 4-4-2, moving Barrera up to his natural position at left forward. Eric Avila was moved from RB to Barrera's old spot on the left side of the midfield and Donny Toia shifted over from his usual duties on the left side of the backline to the right. It was a refreshing and effective change as Avila and Barrera moved in to roles more familiar and advantageous to them (CUSA signed Barrera as a striker). While the production wasn't evident due to the defensive tactics, the attack clearly seemed to be more dynamic with more options around. It will be interesting to see if Cabrera keeps with this lineup going forward. One thing to keep an eye on is the that these moves caused the back line to get that much slower.

4. Where does this leave Avila? Earlier in the season, Wilmer Cabrera made claims that Avila could one day compete for the RB spot on the USMNT. He saw bright things from Avila as he thrust him into the position out of necessity. Three months later, Cabrera shifted Avila over to the midfield. "We wanted to give Eric Avila a little bit more freedom to attack,"  Cabrera said after the game. "He's an attacking player more than a defender. He's been doing an excellent job as a right back, but we're sacrificing him more than we're taking advantage of his skills"

So, essentially, Cabrera clearly makes it known that Avila's much more effective in the midfield than as a defender. I think that's something we can all agree on.

5. The First 15 Minutes Are Key - One of the biggest reasons CUSA has struggled this season is that they have consistently failed to come out of the gate running, preferring to sit back and react to whatever opponents throw at them. Againnt the Galaxy, CUSA played with urgency from the get-go. They were pressuring early, causing turnovers in dangerous areas, and forcing play into their attacking half. LAG coughed up the ball on a number of occasions on their side of the field, leading to a good amount of CUSA looks at goal. CUSA had a number of reasons to be influenced to start with conviction: they were previously thrashed 3-0 by the Galaxy, had demoralizing results against Portland and Philly, and the fact that it was a Clasico.

6. Kennedy Saves the Day - In order for the Goats to have any shot against the Galaxy, Dan Kennedy needed to have a big game. He responded with 6 saves, none of which were more spectacular than the series of events in the 27th minute that earned him the MLS Save of the Week award (Premature? Absolutely not!). In 27th minute, Dan Kennedy came through with one of the finest saves of the season, cleaning up Donovan's curling chip shot and following it up with a desperate collection on Sarvas' rebound.

7. A Day of Personal Achievement - On top of his good game, on Sunday, Dan Kennedy became overall CUSA appearance leader with 124. To go along with that, Cubo Torres' goal tied him with Cuauhtemoc Blanco for all-time MLS goals by a Mexican born player with 16. Congtats to both!

8. Possession Watch - Sunday marked the 4th time in 5 games (and 3 consecutive games at home) that CUSA has been limited to a possession rate in the 30th percentile. The "sit back and hope you don't get scored on" mentality isn't gonna win the Goats very many games, especially when done at home. By parking the bus so much, possession is hard to come by since opponents are usually in perfect position to swarm the ball and regain possession in a condensed space.

9. Post-Goal Tactics - Most will say this was a battle of two halves, but really, it was a battle of 20 minutes versus 70 minutes. While they didn't dominate the possession, CUSA came out with conviction and were taking advantage of all the open space in the Galaxy's defensive side of the field. Once Cubo scored, things changed as evidenced in the following chart (ouch, not that possession chart again!): 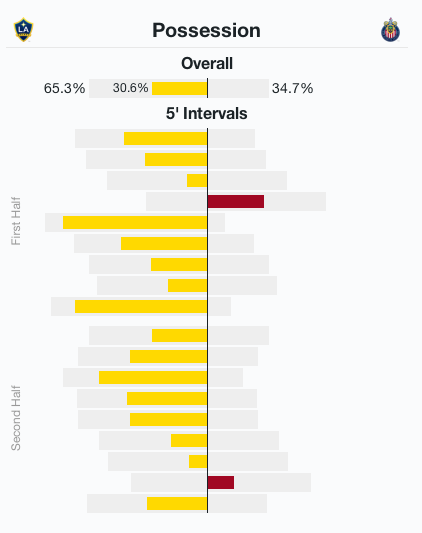 Note that in the following chart, CUSA only won the possession battle on 2 occasions: one of them being during the 5 minute span where they scored. After the goal, LAG's possession numbers jumped dramatically and by throwing 10 men behind the ball, CUSA essentially handed over the keys of the game to the Galaxy. It's crazy to think that during those opening 20 minutes, CUSA actually out shot LAG 4-1. In the 70 minutes thereafter, Chivas were out-shot 2 to 17. 2 to 17!

10. Clasico Notes - Cubo's goal marked CUSA's first goal against the Galaxy since last season's Carlos Alvarez stunner. In the 3 games in between, the Goats had been shut out by a score of 9-0. Wanna get more depressed? The Goats have only scored 4 goals against the Galaxy since October of 2011. Wanna feel better? The Clasico is still up for grabs as the final meeting between the two meetings will be August 31st. Wanna feel even better? We're sending two Goats to the World Cup, while the Galaxy are only sending one.

That's right, this supposedly Mexican club is sending a Honduran (Marvin Chavez) and Ecuadoroan (Oswaldo Minda) to Brazil (and have a couple of ex-Goats representing the USA (Brad Guzan) and Costa Rica (Michael Umana). #Diversity