The attack remains a work in progress, but they got the job done against San Jose.

Chivas USA were able to extend their post-World Cup break success by squeaking out a narrow 1-0 win over San Jose in Wednesday's midweek encounter. There were lots of talking points in this one, so here are 10 observations from last night's game:

1. The Finley/Torres partnership - After making his debut at forward alongside Erick Torres against RSL, Leandro Barrera started this game on the bench. In his place, Ryan Finley was not able to get things going with Cubo in the final third and make any sort of impression on the game. Barrera was eventually subbed in in the 71st minute and was immediately able to take make noise on the counter, using his speed and 1v1 skills to take advantage of SJ's high line.

2. Going up against another depleted squad- With Chris Wondolowski, Clarence Goodson, and Shea Salinas out, CUSA went into Buck Shaw with a great opportunity to take home a result against a depleted Earthquakes squad. Making matters worse for the home side, San Jose was also a team in a rut with a 3-game losing streak, going scoreless in two of those games. Last week CUSA capitalized under the same conditions against RSL, so it's great to see the team take care of business when they need to and not buckle under the pressure of late game situations.

3. Lots of switches by SJ - During the game, Earthquakes coach Mark Watson made it known that his team would try to take advantage of CUSA's narrowness and overcommitment issues. As a result, we saw lots of cross field switching that almost always resulted in 1v1 opportunities for both SJ fullbacks, especially Stewart on the left, who finished with 8 crosses. The constant switching gave Donny Toia tons of responsibility in not only being aware of quickly coming back to defend after an attack, but to not drift too far in or too far out wide on defense. He almost fell into the trap in the 42nd minute, when he got away with a desperate tackle at the top of the box, a foul that could've easily been a red.

4. Cubo Goal: Capitalizing on Mistakes - At first glance, Cubo's goal in the 53rd minute seemed to be an example of some of the best team ball attacking in the final third this team has shown in a long while. They had numbers in the box, advanced as a unit, and were able to take advantage of a giveaway by SJ in a dangerous area. After watching the replay, it appeared it had more to do with SJ's poor defending in the box, leaving Cubo all alone on the far post. On the other hand, CUSA's defensive pressure and their ability to get numbers in the attack certainly helped. The goal gives Cubo 11 on the season, good for 2nd in the league.

5. Scoring first opens opportunities - After CUSA was able to get on the board, the game started to open up, as expected. With SJ's line getting higher and higher, the Goats' midfield and attack did a great job pressuring, causing turnovers.  There were a total of 14 CUSA recoveries/interceptions on SJ's side of the field, and 10 of those came in the 2nd half.

6. We're going streaking! - Wednesday night's win in San Jose marked CUSA's first two-game winning streak since weeks 4 and 5 of 2013, where the Goats started the season 3-1-1. The team hasn't had a three-game winning streak since weeks 7-9 of the 2009 campaign (think Preki, Alecko Eskandarian, Maykel Galindo). That's just crazy to think about. The 1-0 win was also CUSA's first win on the road since their 3-1 win in Colorado back in early May and was their first shutout on the road since week 20 of the 2012 season.

7. Nate Sturgis Makes his Debut - In an interview after the trade was finalized, Colorado coach Pablo Mastroeni said that Chivas USA coach Wilmer Cabrera wanted Nathan Sturgis as soon as possible and Cabrera didn't waste any time in putting him in the lineup. With CUSA up 1-0, Sturgis entered as the 3rd DM in the midfield alongside Marky Delgado and Oswaldo Minda, while Mauro Rosales had his usual right side roaming duties.

All in all, Sturgis had a very effective debut in his limited minutes. He never overcomitted and was patient, making smart passes out of the back. Sturgis was great in his containment and works well without the ball. His slide tackle in the 91st minute essentially preserved the win for CUSA. The guy isn't gonna light it up, but based on how he performed in his debut, he can be very effective.

8. The Return of Jean-Baptiste? - CUSA saw the return of a familiar face in the 79th minute, when Andrew Jean-Baptiste subbed in for Rosales. He appeared to be reinforcing the back in a 10-minute 5-3-2 formation and it was good to see him perform up to his usual standard. On an unfortunate note, AJB appeared to have pulled up lame right before the final whistle and was seen limping to the sideline for a throw-in. He was previously out with a sports hernia, but considering he was grabbing his hamstring it could be a separate issue (or perhaps no issue at all). Either way, let's hope he's able to recover quickly.

9. More than just Cubo - Don't get me wrong, he certainly deserves all the praise he's getting and remains one of the most underrated players in the league, but lost in all this madness is how others around him have done plenty to allow him to seize that success. Whether it be players like Barrera drawing fouls in the box for PKs or Tony Lochhead serving up a pinpoint cross like he did against RSL, this team is much more than just Cubo (but even still, the kid is just absolutely fantastic in his finishing).

10. Martin Rivero's Absence -  Rivero was not in uniform against San Jose and Delgado started in his usual spot. In their pre-match photograph, the starting 11 were shown holding his jersey in a sign of solidarity. Whatever the case may be, we certainly hope everything is well with Martin and hope to see him back in the lineup soon. 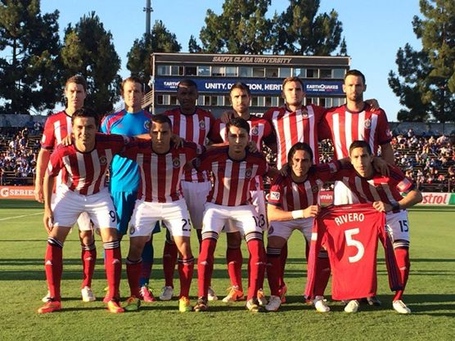