Plenty to smile about in this one, especially after one moment of brilliance.

Share All sharing options for: 10 Observations from Chivas USA's win over Montreal Impact

Here are 10 observation's from Saturday's 1-0 win:

1. Double Game Week Starting Lineup - It was interesting to see the same back four start and go 90 minutes on Saturday after doing the same only two days earlier against San Jose. The decision was a bit questionable not only because three of them (Carlos Bocanegra, Tony Lochhead, and Bobby Burling) are among the oldest players on the roster, but also because Eriq Zavaleta and Andrew Jean-Baptiste were available on the bench.

After seeing Ryan Finley start (and struggle) against San Jose on Wednesday, Leandro Barrera's inclusion in the starting lineup alongside Cubo was expected, as was the exclusion of Oswaldo Minda considering all his recent World Cup travels to go along with his 90 minute performance on Wednesday.

2. MLS not doing CUSA any favors with their scheduling - After traveling from San Jose back to Los Angeles on Thursday, Chivas USA had to lace ‘em back up 72 hours later at the StubHub Center. Considering the Galaxy played on Friday and nothing was scheduled at StubHub on Sunday, it's a bit strange why MLS didn't throw CUSA a bone and give them an extra day to rest. It makes things even more frustrating that Chicago, who also played on Wednesday, played their second game on Sunday.

3. Tim Howard sighting - Tim Howard, America's summer hero, was spotted at StubHub taking in the game and supposedly met with the team afterwards. Don't get ahead of yourselves, though. Howard has already said a return to MLS is not in his near future, and well…we already have a brick wall between the posts in Dan Kennedy. 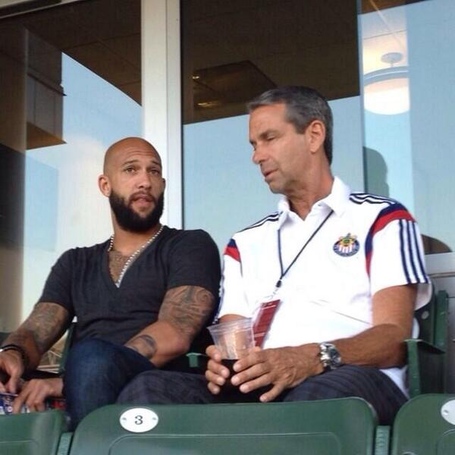 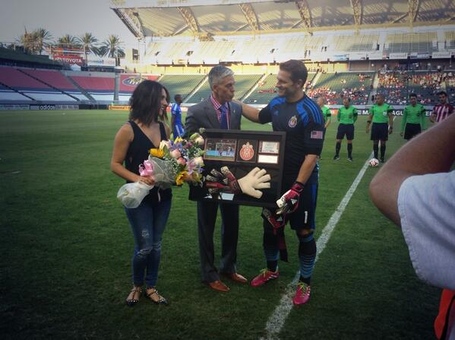 There's just so much that makes this goal so amazing. His split-second reaction to find the ball, trap it, and finish with a stunning side-volley chilena for a game winner.

The guy is brimming with confidence and it's so infectious that it's spilling over to the rest of the squad.

Kudos to Nathan Sturgis for having the patience to find the best option for his pass and to Marky Delgado for his awareness to cut back inside to get a better look at goal.

It was just amazing and Cubo would agree:

"I think that this goal is one of the most beautiful goals I have scored. This one being in the 93rd minute, I think it's a goal that really marked me and one to see a few more times. I think of the 18 goals I have scored, I would rate this one second, behind the one I scored a couple of weeks ago, the volley. I think this one is also very beautiful and I have to thank God and my teammates for all their hard work and their help."

In my opinion, it was his best effort yet considering the circumstances, the awareness, and most importantly, the technical ability to create something out of nothing when the team needed it most. Cubo Torres has single-handedly brought this team up from the ashes and the front office's effective push to keep him in Los Angeles for at least the remainder of the season has to be the highlight of their resume.

6. Records and Streaks - The win marked CUSA's first 3 game winning streak since weeks 7,8, and 9 of 2009, which was also the last time they recorded 3 consecutive shutouts. Looking ahead, the last time CUSA had a 4 game winning streak was in weeks 25-28 of 2008 and if you're wondering when the last time they went 4 consecutive games without giving up a goal, well, it's never happened. It's a pretty amazing string of facts considering we're talking about a team that many considered to have one of the worst defenses in their history. That clearly is no longer the case.

7. Chavez's contributions - The last only time Marvin Chavez suited up for CUSA, he scored 2 goals and the Goats came out with a 3-1 win in Colorado. While he didn't score in his 2nd appearance, he did make a positive impact. Chavez excelled on the left flank, giving Justin Mapp and Hassoun Camara fits with his speed and unpredictability. He was able to create opportunities in the final third, including this nifty shot on goal in the 45th minute.

8. Too much deep ball - Gain possession, win the duel, cough it up. That seemed to be the trend Saturday night as CUSA could not seem to hold possession for more than 1 or 2 passes. The majority of the problem stemmed from the continual preference of the longball over the safer, more precise short pass. CUSA recorded 54 longballs against Montreal, connecting on only 29.

9. Open Play Crosses - Along with the reliance on the inefficient long ball, CUSA has been pretty reliant on crosses stemming from their wide style of play. Against Montreal, they attempted 15 and only 3 were accurate. 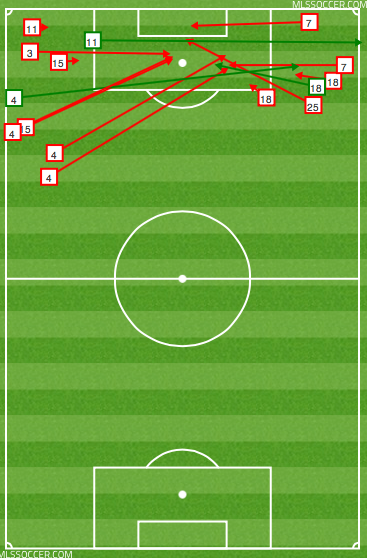 10. Possession issues against underdog at home -If the Goats wanted to win a possession battle, you'd be hard pressed to find a better opportunity than against Montreal at home as the two teams rank among the league's worst when it comes to taking care of the ball. Instead of coming out strong, CUSA was out-possessed 41/59 in the first half, but did a better job of picking up the pressure in the 2nd, finishing the game with a more respectable 47/53 split.