Key Observations from Chivas USA's loss to the Portland Timbers

"The Goat Slayer" returns, and which familiar face has something in common with the Pope?

Share All sharing options for: Key Observations from Chivas USA's loss to the Portland Timbers

It was only four weeks ago that CUSA was riding it's most successful string of games in years. Fans were buzzing, Erick Torres solidified his All-Star roster spot by scoring in six straight games, and the Goats were all of a sudden relevant and only one point out of a playoff spot.

The dream was short lived.

With their loss to Portland, CUSA has now lost their 4th game in a row and has scored only one goal in that span.

Here are some Key Observations from Saturday night's 2-0 result at Portland:

Change in Formation -  True to his defensive nature, Wilmer Cabrera started the season with the 4-2-3-1 formation. Deciding to change things up after the debacle at home against Portland and Philly just prior to the five-game unbeaten streak, he changed it up to a more versatile 4-4-2. Now, in response to the current losing streak, we've seen 2 consecutive games of 4-5-1, utilizing a 3 man defensive midfield (Oswaldo Minda, Agustin Pelletieri, Nathan Sturgis), with Cubo as the lone striker.

Portland's Successful counters - Going into the game, we knew CUSA's gameplan -- play conservatively, stay in front of the ball in numbers to contain, and hope for a chance at a quick counter. To everyone's surprise (ok, probably not everyone) Portland took the last part of that game plan and threatened CUSA's occasional high line with numerous counters of their own. The Goats gave up possession on too many occasions with everyone pressed up and POR responded swiftly and effectively.

In Portland's first goal, with all 3 DM's pressed high, Pelletieri loses possession in the final third with a heavy touch and Portland's speedsters are off to the races with nothing but a back-pedaling backline to stop them. Sturgis tries his best to catch up and pressure Diego Valeri and actually does find the opportunity to stay in front of him, but one nifty cutback is all Valeri, "The Goat Slayer" (four goals, one assist v CUSA) needs to create the space to get off a MLS Goal of the Week nominee. (Take a look at the criss-crossing by Fanendo Adi and Gaston Fernandez on that counter. Well done.)

Bocanegra's Concussion - For the 3rd consecutive match, Carlos Bocanegra was left off the matchday 18 due to concussion-related symptoms. While its relieving to see him take his time in making sure he's ok for a proper return, one has to wonder if at this stage in his career, the amount of time he's been gone, and the current state of the team, whether it's worth any risk at all. The situation brings back memories of Jimmy Conrad's departure from football after sustaining a concussion with the Goats back in 2011.

Decent Defending on Portland's 2nd Goal - On Portland's first goal, CUSA's midfield was caught too high and they paid the price. On the second goal, they made the right decisions yet still could not keep the ball out of the net.

As Portland was attacking the right flank, Diego Chara made a run right past Sturgis and into open space. Tony Lochhead popped out to cover and Sturgis correctly made sure to fill his spot. It's unfortunate that Lochhead's slide tackle on Chara (after being nutmegged, mind you) ended up a perfectly placed pass to the Goat Slayer himself (Valeri), but it's Adi's trap and turn that causes Eriq Zavaleta to fall off balance, giving Adi the time to make the final pass. On the other hand, overlooked in all this is the slight shove Rodney Wallace gave Akira Kaji to create space. Foul?

The Lack of a Consistent Identity - After playing one of their better games on the season in their loss last week against Dallas, CUSA responded by failing to apply the same sense of attacking purpose and intensity to their game against Portland. Despite doing a decent job in maintaining possession, they were never able to create the same sort of chances the Timbers were able to. CUSA appears to go into games with a gung-ho defensive plan but a "cross your fingers" type approach on their breaks.

That Villafana Banner - Looks like Portland's trying to lay claim to our Sueño. He crosses like the Pope. 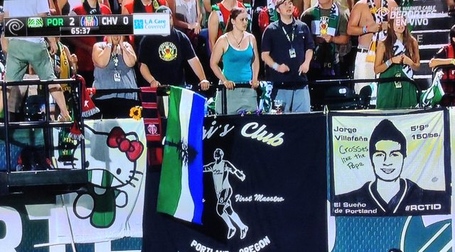 When in doubt, kick it out - Portland finished the game with 43 clearances and was able to quickly extinguish any advantageous situation CUSA was able to create. CUSA, on the other hand, finished with only 18 clearances despite playing most of the game on their defensive heels. There is clearly not enough defensive pressure being applied in CUSA's defensive third and their inability to close out consistently provides opponents with plenty of time to create optimal looks at goal.

Speaking of Crosses - By utilizing a three-man central midfield that lacks any semblance of a creative distributor, CUSA is forced to play wide and settle for crosses. Lots and lots of crosses. Against Portland, the Goats attempted 31 of those now-ubiquitous crosses and connected on only three.

By now, we can expect Leandro Barrera to be true to his traditional left winger role by taking possession to the end line and sending cross after inaccurate cross. Opposing teams probably have this in bold and highlighted on their scouting reports. What makes Barrera dangerous are the times he turns into an inverted winger and creates havoc when he cuts inside. This type of movement can not only lead to shots on goal, but can also open up space for players like Cubo waiting for their opportunities to pounce. It's an aspect of the game Marvin Chavez has shown glimpses of.