Key Observations from Chivas USA's loss to the Seattle Sounders

Is it time to give the keys of the defense to AJB and Zavaleta?

Share All sharing options for: Key Observations from Chivas USA's loss to the Seattle Sounders

What happens when you get the league's highest scoring side matched up against the league's worst defense (and offense)? You get a 4-0 scoreline at halftime and a demoralized Chivas USA squad looking for answers.

The silver lining here was that CUSA was able to pick things up in the 2nd half and found a way to end their scoreless streak at 597 minutes, all without the services of their lone ranger, Erick Torres. Think about that for a bit. That streak lasted a little under 10 hours of play.

Here are a few Key Observations from CUSA's 4-2 loss to the Sounders:

Stopping Dempsey and Martins - In my opinion, Obafemi Martins and Clint Dempsey are easily the best attacking tandem in MLS. For the short amount of time they've been paired together, they've developed enough chemistry to give opposing backlines fits and their effective combo passes leave defenders pulling out their hair. Coupling a high unathletic backline with a punishing Seattle counter attack, it was a disastrous plan from the get-go. Jhon Kennedy Hurtado and Bobby Burling struggled keeping in front of the ball and it wasn't until Cabrera subbed in Andrew Jean-Baptiste that the leaking hole was plugged. Keep in mind that Hurtado was struggling so bad that Cabrera was forced to make a defensive sub down 0-4 at halftime.

AJB Provided an Answer to the Dempsey/Martins - In his 45 minutes against Seattle, Jean-Baptiste played his best game as a Goat. As mentioned above, his athleticism and his cautious aggressiveness was the biggest contributing factor to changing the game in the 2nd half. AJB showed a lot of fight in this contest and if he didn't beat Obafemi or Dempsey to the ball, he certainly made sure they didn't do anything with it. While he has shown moments of instability in the past, when you consider the current status of the team, you have to wonder why the decision was made to bring in an older player like Hurtado. If anything Hurtado should be coming off the bench and letting guys like AJB and Eriq Zavaleta develop during this lost season.

At the very least, get the guy a proper jersey. 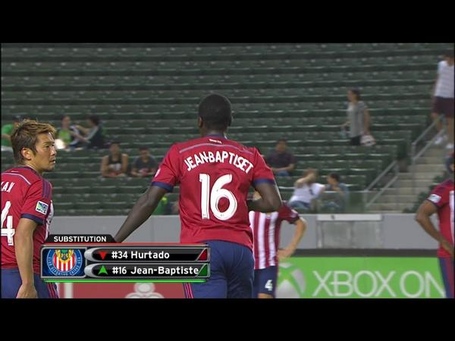 Faulty Set Piece Defending Decided the Game - Seattle was able to score three of their four goals off of dead ball situations and thanks to Andy Rose, two of those goals came under almost identical circumstances and less than four minutes apart. CUSA's inability to win balls in the air, keep their mark, and man the far post allowed Brad Evans to end the night with three assists on three well-placed balls.

Can't Sustain the Good Start - Wednesday night marked the 2nd game where CUSA came out with purpose. They did a good job emphasizing possession and making the smarter pass out of the back. In both cases though, the attempt never lasted very long. Both Seattle and the LA Galaxy found ways to take advantage of CUSA's high line early, which essentially pushed CUSA back into a defensive strategy. In any case, whether it was a result of Seattle taking advantage of preserving a four-goal lead or whether CUSA's attack got its act together, Wilmer Cabrera referred to the team's 2nd half effort as the best half of soccer CUSA has played during his time in charge.

What Good is a Rebrand in Name Only? - The poor result coupled with the emerging rumor that Chivas USA will not be rebranding next season got me thinking. Would it really make that much of a difference if CUSA rebranded, yet still played at Stub Hub? The ickiness of the past would provide a unsettling reminder of how the rebrand is only masking the bigger problems of lacking a true, individual LA identity.

How the "Comeback" Didn't Help - Part of me kind of wishes Seattle would've wiped the floor with CUSA as a loss of that magnitude would've brought more attention to the dire need of the club and its fans. For an MLS side that has been in MLS limbo and has played the role of observer instead of participant, we're practically begging for change. For the sake of our own sanity and continued interests, we need transparency. The current unresolved mystery of what awaits only makes matters worse.

Sigi Sums it Up:

Sigi at half says that he'd like to rest guys, but that they are all having fun and want goals.

Who Want's to Take a PK? - Remember the fabled Jose Correa/Bowen incident when Correa fought off Tristan Bowen to take a PK only to hit the post? In the 60th minute, Ryan Finley drew a foul in the box and immediately gave Felix Borja the Mutumbo finger wag, which in CUSA folklore, is essentially the kiss of death. Lucky for Finley, his shot found a way past Stefan Frei despite Frei guessing correctly.

In the post game presser, Cabrera mentioned he doesn't designate PK takers and that he believes his players are mature enough to decide for themselves. When asked about the Finley/Borja conflict, Cabrera said he would rather his players fight over taking the kick instead of no one showing any interest at all. It's hard for me to disagree with that statement and while it may seem a bit immature, its actually good to see players show that emotion in what has been a rather emotionless season. Strikers need to have that sort of heartless desire to score. Extra points to Finley for his attempts to get the crowd back into it.

Right back in the saddle: Chivas USA take on the Seattle Sounders