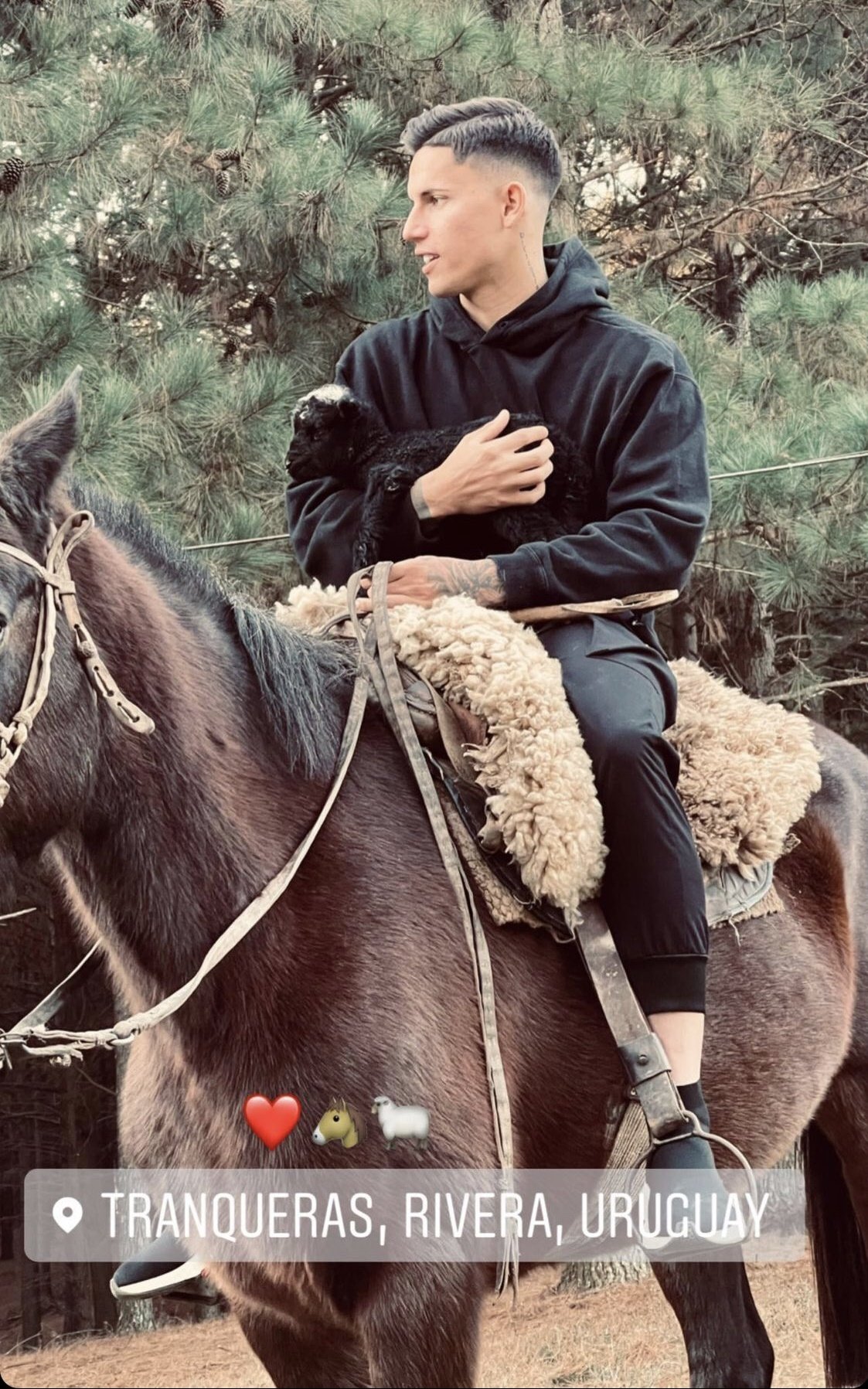 The Saga of our favorite DP continues.

After his demand to leave, and his failed loan at Almeria, followed by a disappointing stint at Copa for Uruguay. Plenty of consternation was brewing among the Black and Gold faithful. Does he want to play Futbol? Does he want to get to Europe? Or does he want to ride a donkey holding a baby sheep with absolutely perfect hair and tattoos???

All this will be revealed shortly.

Following his social media, which is full of influencer type, high gloss pictures, with absolutely perfect hair... He has seemed to care about everything in life with the exception of Life in Los Angeles, and putting on a shirt with the best looking crest in the league.

There are so many angles to consider here. And the rumor mill has been abuzz with details. So this will veer a bit into tabloid territory, But I will state here, I am not a Journalist. (leave that to Alicia, who has far more discipline)

I am a fan and a super homer. So the following will not really be backed up by anything but hearsay. Take a spoonful of salt, and let's consider some of what I've heard from my network of fans who nerd out, and live and breathe LAFC. So here is what I have heard around the rumor mills on this.

Shout out to our LAFC Spaces twitter group, where we chat weekly about this, and @LAFCUY LAFC Uruguay, who always digs up good dirt on our Uruguayan players.

Starting on this, we need to set the mood.... Brian came here on a massive deal. around an $11.5 Million transfer deal, and just over a Million a year salary. He passes all of the eye tests. One of the most obviously gifted athletes in MLS, Amazing Twitch reflexes, Ball control, everything. The physical gifts to be an obvious top 50 world player.

But as we saw, He would get into great positions, and then the finish would be flubbed. To myself, it seemed like mentally, he just lost in front of net. He did put some good assists up, and the opposing teams felt he was a threat enough to dedicate resources to tracking him, Which opened up Vela and others to do their damage. However, a team does not break the bank to get a decoy or assist player. Brian had some work to do.

Looking at an article from Uruguay, written about the supreme, raw talent he has, It also talked about his behavioral issues. Due to his natural talents, his work ethic in his youth was something that concerned coaches and scouts. He didn't have to try as hard as other athletes who were not as athletically gifted, so he didn't.

He would show up late for practice, and be a bit of a prima donna. I believe this is something our Scouting team missed on him. And I also think Penarol knew this and pulled a fast one on us. We had Success with Rossi, and I think Penarol misjudged how good Rossi would be, and possibly leveraged his early success to hype and sell Brian to us.

So as Brian began to fall out of favor with Bob and our side, and his playing time began to fall, as well as his production, Instead of using Rossi as an example of Grinding, and quietly putting in the effort, He would act entitled, and get upset. Blaming the world for being unfair instead of bettering himself.

Watching his early games, and seeing him lose the ball trying to dribble around defenders, I would often think to myself that he in underestimating the opposing defenders / overestimating his ability. A general lack of Self awareness.

We saw this further manifest itself mid 2020 where he essentially demanded to go to Europe. The club obliged and sent him to Almeria... where he proceeded to sit on the bench and get very marginal playing time.

Following this, and all LAFC supporters hoping he would get transferred out so we can have our 3rd DP slot back, He failed to impress. He was sanctioned by the club for holding a press conference where he said "I wish to go to Penarol where they love me. Nobody loves me here " (essentially)

Then leaving to the Uruguay National Team. Not only did he not make the bench for most games, He also missed the team bus to a game. ( he missed it because he was listening to music in his room.)

While players like Palacios immediately returned to LA BEFORE he was obligated. Brian, after not seeing the field, stayed behind, worked on his Instagram model side hustle... and seemed to not want to come back at all.

Yesterday, he updated his social media to show he was in Los Angeles.

We are still obligated to pay him over a million a year for then next couple years, His contract, while not known, is most certainly going to run through next season, likely an option to pick up. The Front Office will not be excited to put a match to the 11.5M transfer fee they paid. they will want to get as much back as possible.

The big question marks will be, How will he fit back into the locker room? I think this is huge. Will his teammates trust him to give him the ball? How will he handle sitting on the bench for awhile? Because through his career, he has not handled that well.

I heard a rumor that through his communications with our front office, that he "knows his career is on the line right now."

I truly hope he can grow from that statement. I hope he can use his countryman Rossi as an example of how work ethic beats everything. He will have to win the trust of his teammates who are starting to fire on all cylinders without him. (maybe he will need to play with Vegas for a bit???)

Tactically, Bob's new 352 and 3412 would fit him very well. He is lightning quick, and imagine him with Rossi up front making runs behind Defenses? Vela in the 10 behind them?

Since he is here, and his contract is the albatross that it is, it's in all of our interest so see him succeed. We will have to be bigger here, and understand he is a young kid, with a troubled past. and embrace the second chance he has. If it can be made to work, He goes from a kid to a Man, it will be fantastic for us, and could be the spark to get to our first cup. And he can learn how hard work is what gets you from good to elite.

Or ....it will all blow up spectacularly.

So put on the seatbelts, we are going for a ride!

(for some Spanish reading, some supporting articles from a Uruguayan perspective.)

Warning: All content on this block will be unabashedly anti-Galaxy. If you show up here in a David Beckham replica jersey, we will mock you. Openly, and in Spanish.